Tales from the Marsh part 2.

Wetlands are filled with strange and wonderful things. They could be called the cradle of biodiversity, with both aquatic and terrestrial habitats available for a myriad of species. Birds, butterflies, water-born insects, fish and turtles all have their habitat niche. 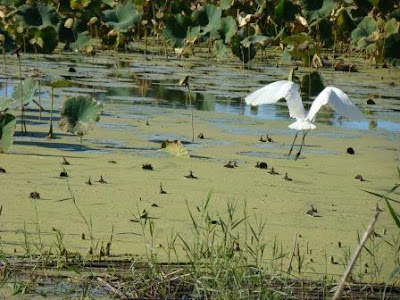 One of the species which thrives in marshes, has a strange life-cycle, born of the water and taking to the sky in adulthood. A relentless predator, and yet prey to larger species during all of its life cycles. One of the earliest species to come forth on earth- out of the mire and muck- the dragonfly. 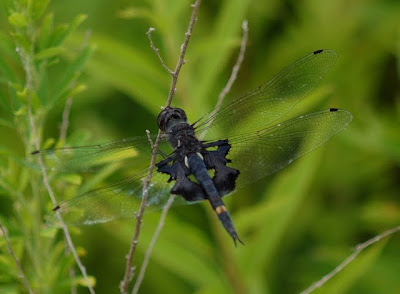 Several species of dragon and damselflies were abundant at Meadowbrook Marsh. The large bodied Common Green Darners were plying their trade above the grasses in the meadow, endeavoring lunch on the wing. Black Saddlebags were found hidden near the edge of the woods, with a wait-and-see attitude toward prey. 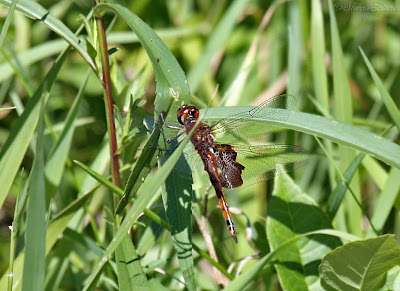 Midway through our Friday morning bird walk, we spotted a stranger saddlebag- this one hovering above, was red. Two possibilities came to mind- with one being rarer than the other. The dragon alighted for but a moment, and the quick-triggered Sherrie Duris stepped in for a photo and documented the first Red Saddlebags at Meadowbrook Marsh. These southerner have been seen in Ohio before, but they appear infrequently, with only eight records in the last ten years.

Unable to call this one in the field, we were fortunate to have Sherrie's photo to send round to the experts. Dr. Dave McShaffrey of Marietta College was quick to forward his diagnostic slides- and bring me up to speed on these two species. 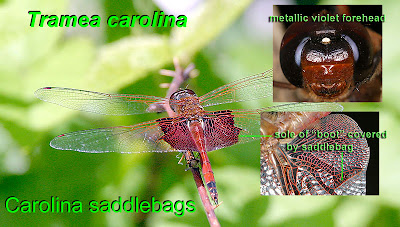 The more common of the two species, Carolina Saddlebags can arrive in Ohio as early as April. I have seen this species several times, and I am always most likely to go with the "commonest" of species. The "Ring-billed Gull, or Red-tailed Hawks" are always first to come to mind.

But today, we were lucky. 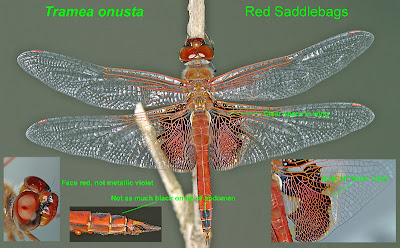 Our photo was a better match for the Red Saddlebags. To study more comparisons of dragonflies or to call up the species maps (see below), please follow this link to : Ohio Odonata Society. 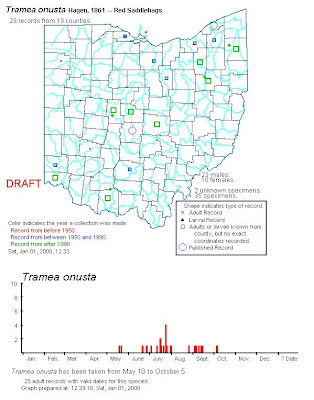 Special thanks to Dave McShaffrey, Judy Semroc, Rick Nirschl and of course- Sherrie Duris, for making this dragonfly identification possible.