We lost a good one this week.  I would have guessed this guy would out-live us all, just due to sheer stubbornness.  He was one contrary son-of-a pup, with an incredible sense of humor.  God, I am gonna miss him.

Don Wolverton wouldn't give a dang if you don't remember his name.  He wasn't about to fill out the paper work for your data base, either. He was a rebel.. of the dirtiest kind.  He loved the land and the soil. He was all about compost.  In fact, one of the first public speaking programs I gave was a program on compost- with Don.  I was so nervous, you know, we Master Gardeners must always tell the truth: based on the O.S.U. line.  I dotted every i and crossed every t.

Our mutual friend, John Makley, gave him a moving eulogy.  He equated Don with the "Contrary Farmer."  If you haven't read Gene Logsdon's works, I suggest you get a' hold of them.  My favorite (so far) is The Man Who Created Paradise.   And just to prove how contrary he is, you can read it for free right here.

But I think this is the book Don would have liked best. Just for the title.  He could have made some serious compost in conjunction with Gene Logsdon.

Last of all, as we said "goodbye" we had a reading from the good book, the Berry.  Wendell Berry that is. If you really want to know the kind of man Don represented, you simply must read Berry's poem- Manifesto:The Mad Farmer Liberation Front.

You can follow that link to read the entire poem, but friends will understand when I say, my heart lies within these lines:


Ask the questions that have no answers. Invest in the millennium. Plant sequois. Say that your main crop is the forest that you did not plant, that you will not live to harvest.  Say that the leaves are harvested when they have rotted into the mold. Call that profit. Prophesy such returns. Put your faith in the two inches of humus that will build under the trees every thousand years.

So yes indeed, "Plant sequoias." And when you are told life is to be short, take a grand tour, fall in  love, make new friends, and cherish the people around you.  Make them your family.

I am still learning from Don.  Always a trooper, his last words were, "It could be worse..."

Lake Erie is the epicenter of life on the North Coast.  We love her temperate breezes in the summer and endure the gales of November.  Sheets of ice, lake effect snow and numbing squalls will greet January's ice-fishing crowds. Best of all, the return of spring and the migration of raptors and neo-tropical migrant birds.

The Marblehead light keeps watch over the wave-washed shores. We tend to think of the light as a quaint piece of history; Ohio's most photographed location.  But before electronic navigation devices it was literally a life-saver for sailors navigating the lake during storms and dark of night.  The light is firmly built upon a dangerous, rocky outcrop at the eastern-most point of Marblehead. 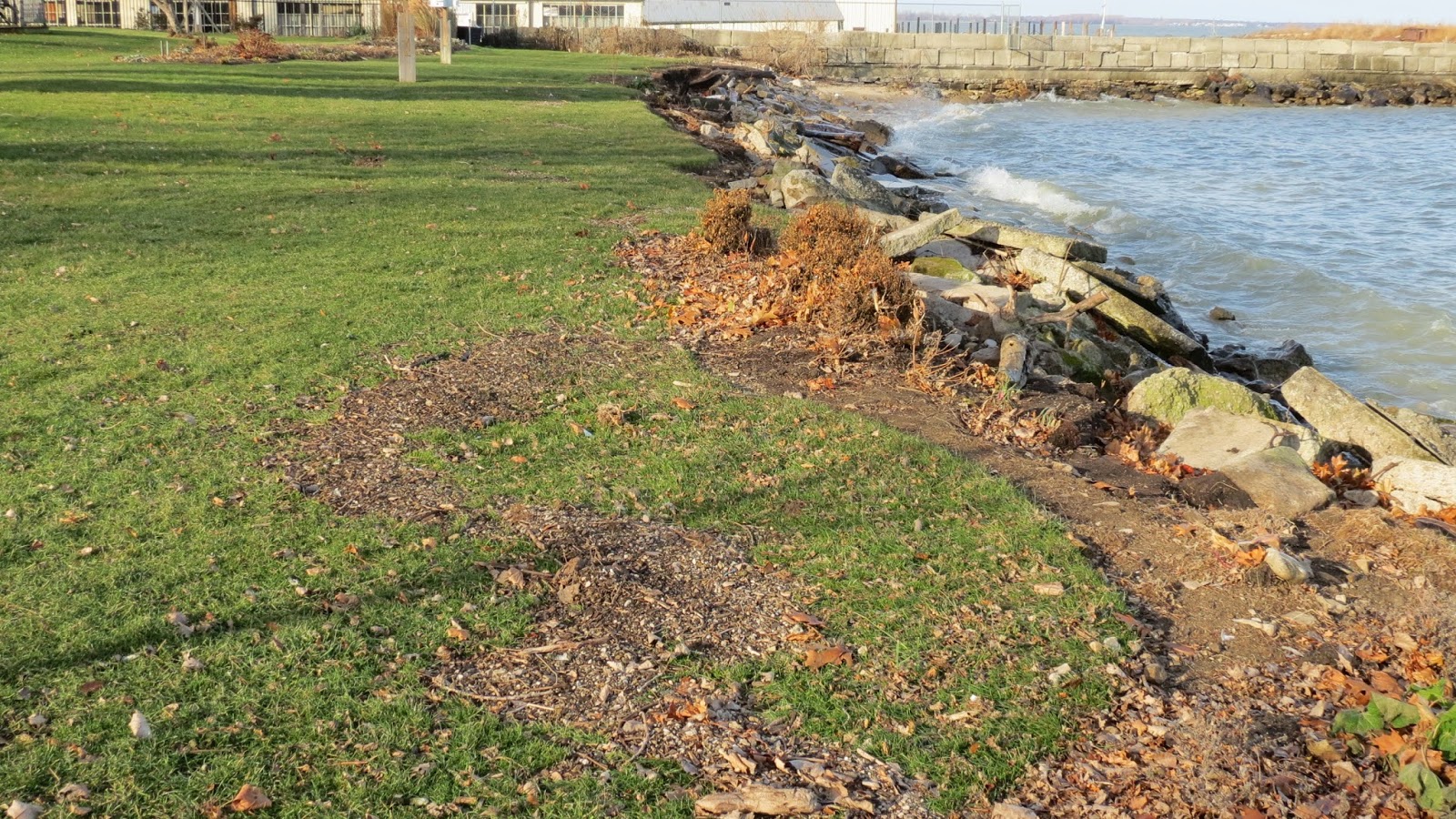 The lake giveth, and she takes away. Our freshly groomed shores of Lakeside took a bit of a beating this fall.  An ambitious November storm, a Nor'easter, chewed on the landscape we planted in late summer.  Waves blew up over the rocky shoreline and re-distributed topsoil and gravel onto the lawn.

The lake deposited some "sticks," or rather large driftwood logs.  Timbers much too big for a man, or even two, to maneuver are tossed about like matchsticks by violent storms.

Even more impressive is the sudden appearance of a large chunk of stone and concrete foundation.  What forces must have been exerted to push this behemoth about the lake!  One must wonder from whence it came? 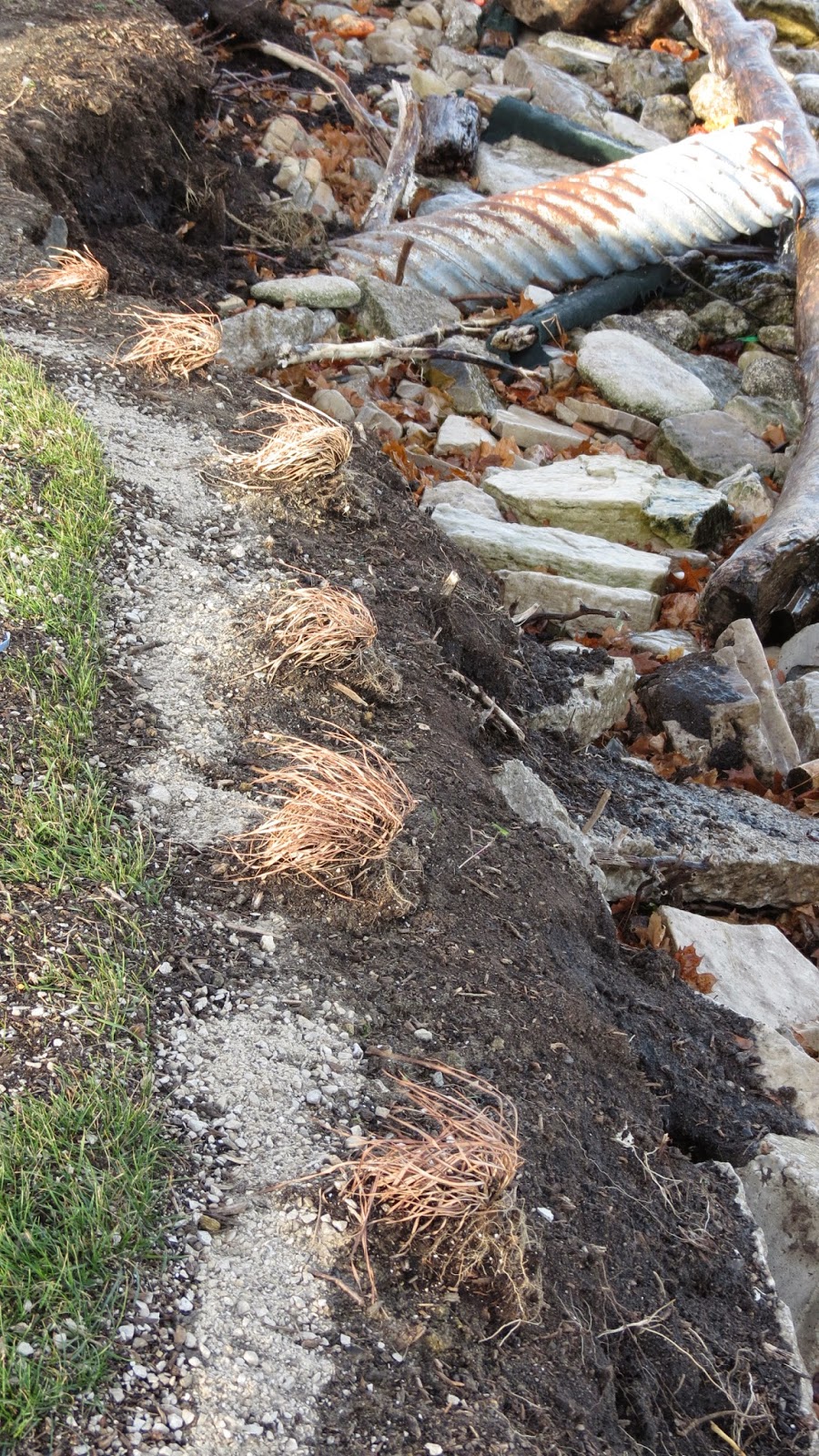 These six little survivors held their ground like true Ohio born champions.  The deep roots of Little Bluestem grass, Schizachyrium scoparium held the earth in place against the waves.  If only the other deep-rooted prairie plants had more than a month to become established before the storms!  Then, they too might have fared better in the defense of our shore.

This was the new landscape as we left it in September. Unfortunately, as the shore was pealed away by the lake, many of the plants were taken for a cold swim.  Storm damage was a risk we seriously considered while planning the project, for there is no assuaging an angry lake.  Erie will have her way,

Fortunately, we allowed for that possibility and chose to keep plantings (and potential losses) to a minimum.  The grass line remains and demonstrates how vegetation is a key component in the fight against erosion.

Who can know what other abuses the lake plans to hand out this winter?  Once the ice forms, the land will be less susceptible to Erie's angry waves.  Recently some of the lakeshore parks in Cleveland have also reported the first large scale storm erosion they have seen in years.  We will watch and see, while planning logical steps to minimize future erosion and damage to our shoreline.

The lake giveth, and she takes away.

Posted by Weedpicker Cheryl at Monday, December 08, 2014 No comments: