Sure Signs of Spring

Winter has had a death grasp on Ohio this year.  It came early and in an act of defiance to all weathermen, it struck one last blowing snowstorm yesterday.  It least I hope it is the last of this year!

Turkey Vultures are said to be incredibly smart and everyone I know who has worked with TUVUs adore them.  They must make up in personality what they lack in looks.  It was a pleasant surprise to have two roosting this morning in the tree at the back of my wood lot.

Spring is back when the Woodcocks return to the Gorman Nature Center.  Last night Jason Larson  led us out to  the prairie to listen for their "peent" call and whirling sky displays.  It is all about courtship.  What a male woodcock won't do to please the ladies!

Spring is here when Guy Denny travels throughout Ohio burning prairies!  He is certified to do the job safely and legally, and in great demand.  He tries to beat those spring season showers, and hopes to have the prairies ready for the April rains.

This is the first time in ten years the Gorman Nature Center prairie has been burned.  Fear not, no Woodcocks were harmed in the controlled fire.  They might enjoy the open spaces for their courting displays.  It will be interesting to see.

Just in time for duck migration, there is now open water on the Clearfork reservoir.  It had the hardest freeze in years this winter!  It is a thrilling sight to have the gulls and ducks working the ice sheets along the edge of the open water.  The parking lot next to the dam is a prime viewing location for waterfowl watching in Richland County.

Last but not least, the Witch-Hazel, Hamamelis vernalis,  in my yard is in full bloom.  This is the earliest bloomer of all our Ohio shrubs and a welcome sight for the botanically deprived.

This may seem like a strange list of spring "firsts" but it is reliable, without question!  Weedpicker officially declares: Spring is here!
Posted by Weedpicker Cheryl at Saturday, March 22, 2014 1 comment:

Cleveland has much to offer, especially if you enjoy a bit of winter birding.  This winter has proven, once again, Cleveland is the place to be.  There are plenty of top-notch birders reporting their sightings and helping folks get fabulous "looks" at everything from gulls to owls.

Jim McCarty covers all the birding highlights in the Cleveland Plain Dealer. Cleveland Metropark's darling, Jen Brumfield, keeps us up to-date with stunning photos on her NorthNW / Lake Erie birding blog.  Many of those photos are taken by our friend, Chuck Slusarczyk.  Chuck's photos* capture the all excitement of a bird on the wing or a good fight over fish-scraps.  Nobody does a better job catching in-flight shots and freezing those grand moments in perpetuity.

*ALL bird photos in this post are the property of Chuck Slusarczyk- and I thank him for allowing me to share them with you.

A Pomarine Jaeger, an arctic bird which generally winters at sea, has been working the river at Scranton Flats and Chuck has been there to document it.


This aggressive pirate, whom Chuck has dubbed "Bruiser," is not above stealing meals from gulls.  He is the bully of the flats.  He will indiscriminately harass gulls and dive bomb unsuspecting waterfowl. He doesn't mind eating a rat or two, either. Think of a black wolf roaming amongst a field of sheep, and you are getting close to nailing his psychological profile.

Most Ohio birders, of the very lucky ones who have ever seen a jaeger, only get distant views of an off shore bird during fall migration.  With this bird haunting the flats on a regular basis, hundreds of birders have ventured into the heart of Cleveland's old industrial area to get up-close views of this magnificent arctic predator.

Even gulls look winsome when Chuck does the photography.  This winter has provided a boat-load of unusual gulls in the Cleveland area. The all-white gulls are of particular interest to bird watchers. 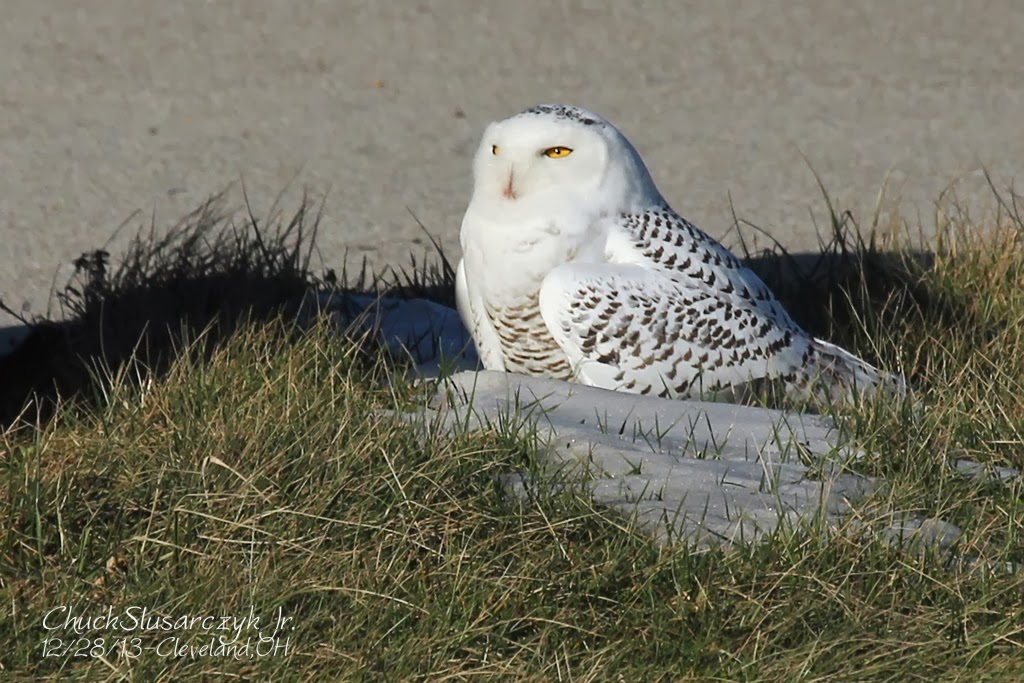 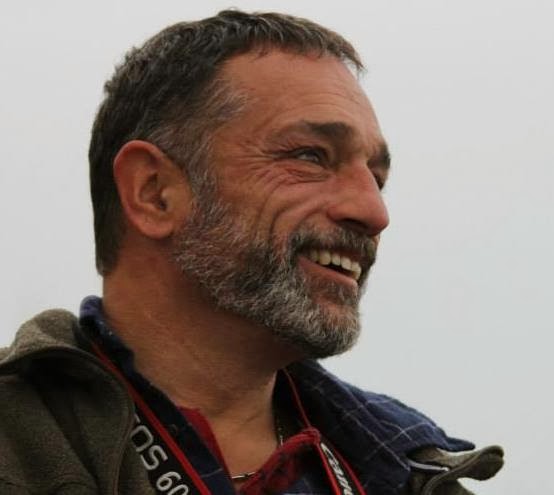 Chuck Slusarczyk, the photographer and his photo
of one of the many Snowy Owls seen this winter.

It is my good fortune to have Chuck as a friend and you can see many of his photos improving my program at the upcoming Shreve Migration Sensation. It it a mix of programs, vendors and wetland birding.  Mark your calendars for March 29th, 2014 and head just south of Wooster, Ohio to Ohio's Amish country for this educational and fun filled event.

You can find the entire agenda and a list of speakers at http://www.shreveohio.com/migration-sensation or read this summary for more details.  We sure hope to see you there!
Posted by Weedpicker Cheryl at Wednesday, March 12, 2014 2 comments: 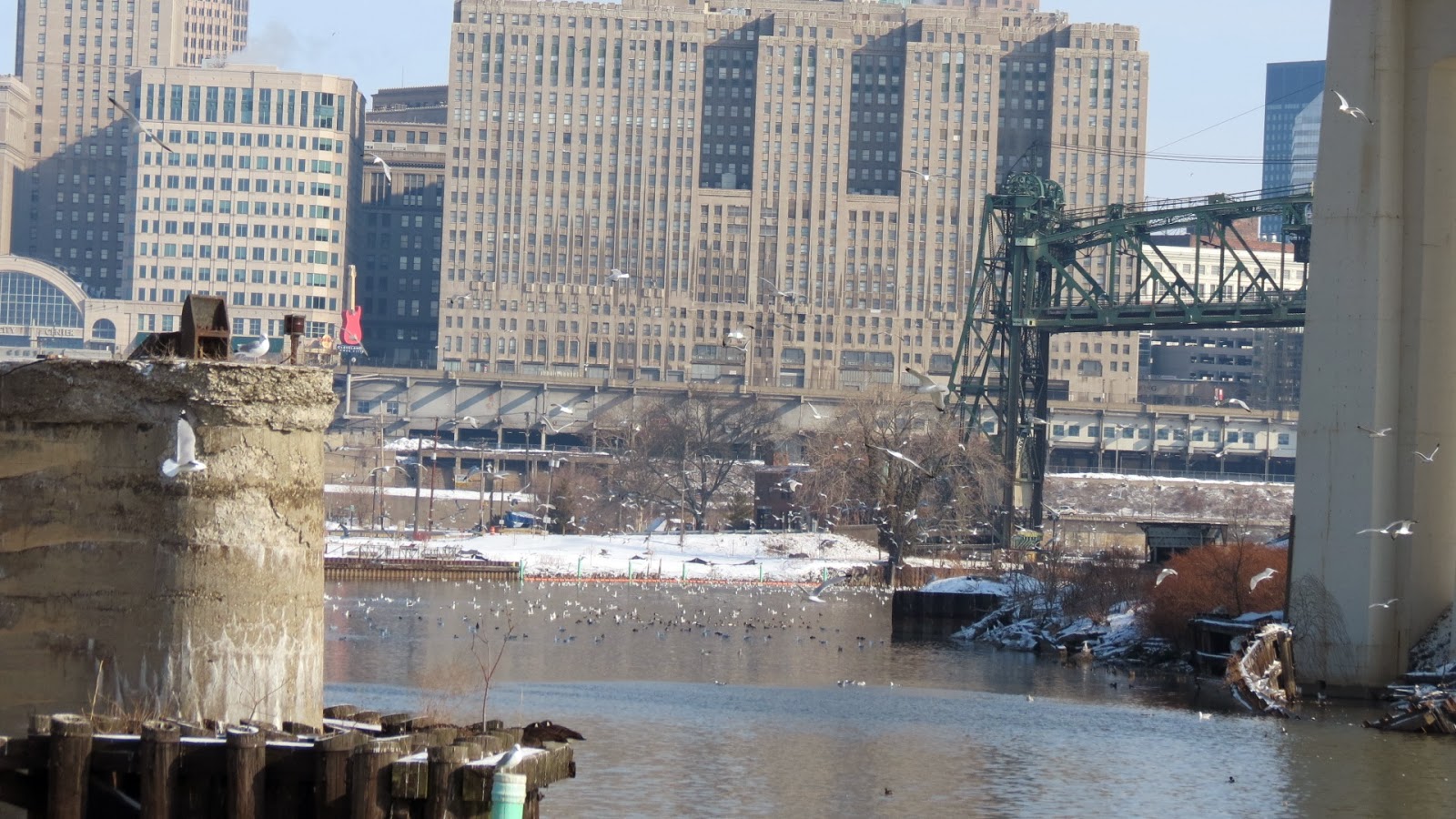 It is that time again!  Our Flora-Quest friends will be gathering to learn more about Ohio and some of our native plants.  This year we are convening at a new location. 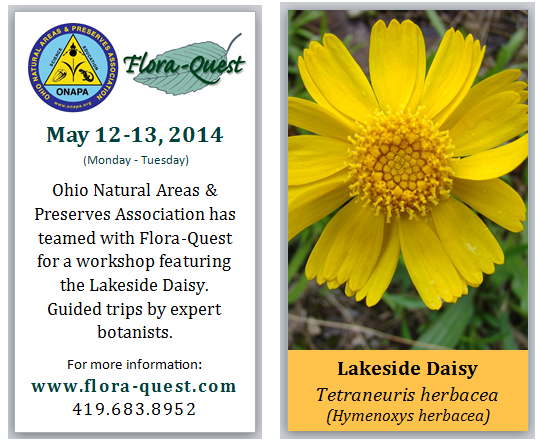 To learn more about the event ( being held on a Monday and Tuesday) go to our web page at www.flora-quest.com,  You will find a registration on-line, and you best be quick.  We are only allowing 60 participants this year- so it will fill to capacity in short order.

This is the first time Flora-Quest is being held in northwest Ohio and it is more of a workshop format, but wait 'til you see what is in store!

Everyone will visit our favorite locations and see the rare Lakeside Daisy.  You can learn all about alvars  (sneak peak on alvars- here).  We have two hotels lined up, and it is perfect timing to see the most migration of neo-tropical birds!

Black-Swamp Bird Observatory hosts its annual event, Biggest Week In American Birding,  where you can also pick and choose from  wonderful guides, speakers and trips- a mere 20 minutes from our location in Lakeside/ Marblehead.  Our pricing is more reasonable than ever this year, and I can't wait to share some of my favorite places in the world with you.

Remember to bring your camera!  We will be visiting Ohio's most photographed location: the Marblehead Lighthouse!
Posted by Weedpicker Cheryl at Tuesday, March 04, 2014 No comments: