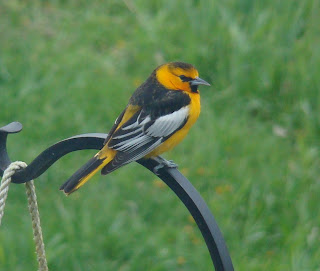 Bullock's Oriole - in Heins' Ohio  backyard-  Photo C. Harner
Hosting a Rare Bird
What you have to understand is that we are not birders, not like you are. Sure, we have an array of feeders under our primary window wall. We keep binoculars and bird guides handy at those windows, but we don’t have life lists or hunt for rarities, and have never planned a vacation around birding. The only hard-core birder we know is my brother Bill Murphy. We thought he was unique.

On Monday, April 11th, my husband Bob and I were beginning to dismantle an ancient pig barn. When I saw a flash of orange zip past, I told Bob I’d seen an oriole, and we agreed this was quite early. We normally have both Baltimore and orchard orioles nesting in a brushy fence line of locusts, cherry and sassafras. Tuesday, Bob saw the orange flash… yup… an early oriole.


Wednesday April 13th, we were enjoying early morning coffee and the sunny clouds of goldfinches at the feeders, when the oriole landed on the old Christmas tree. We always tie our holiday trees to a post near the feeders for cover. Otherwise, our feeder array becomes breakfast buffet for hawks, and besides, the tree looks so neat covered with cardinals in winter and goldfinches in spring. The bird moved to a suet feeder, and pigged out.


This oriole looked different from a Baltimore. It wasn’t in BIRDS OF OHIO. It did look exactly like the Bullock’s in PETERSON, but that bird lives far, far away. Emailed my brother Bill Murphy, the family bird guru. Bill was gently skeptical that there was a Bullock’s oriole in Monroe County Ohio. Bob emailed some pictures.


Bill called a few minutes later, pretty excited about the bird, and asked if we minded if he posted it on “the rare bird list.” This meant nothing to us…feel free.


The next phone call, maybe an hour later, was a cheerful normal-sounding woman named Su Snyder who asked if we were the people with the Bullock’s oriole… and would we mind if she came to see it. No, of course not, but we couldn’t guarantee that it would be here… it wasn’t in a cage or anything… it wasn’t exactly our bird… When she asked for directions, we learned that she was in Wooster. WOOSTER! Seriously… Wooster?


Bob and I looked at each other, after the call ended, and rolled our eyes. Who would drive 100+ miles to see a bird? Or not see it, which seemed more likely.


When Su arrived, with a smiling man named Greg Miller, she suggested we have a sign in sheet. Next came a van with some Amish men, who had closed their Holmes County store to come down. (Time & Optics?) A group from Columbus pulled in. Cleveland birders made their way down our miserable little dirt road. We couldn’t believe any of this.


People brought presents. One fellow called it “homage d’oriole”, as he presented a bag of oranges. They brought suet blocks, and jelly, and homemade goodies (thank you, Hallie), and even a beautiful wooden oriole feeder. We also were handed a little cash, for bird food, but it has gone straight to the library to support the children’s summer reading program. Thank you, thank you.


People called for directions, and with strange questions. What brand of suet? (Brand? We buy what’s on sale.) How often does it feed? (When it’s hungry, I guess.) Then we realized that because this is a singular bird, we actually could track its visits to the feeder. Dear little obliging fellow came almost exactly once an hour to the suet. We have two suet feeders, and his preference seemed to be whichever was without a red belly.


Thursday morning, we woke to find a birder already here. By mid-morning, the hill facing the feeder looked like a courthouse before the rock star emerges… a long line of tripods topped with high tech stuff… cameras, lenses, spotting scopes.


Periodically, we emailed Bill the names of our guests. “Wow! You’re hosting the royalty of Ohio birders…” It was startling to realize we’d been casually chatting with one of the authors of our BIRDS OF OHIO. When we asked someone if this bird would be accepted as a “real” rare bird (We hadn’t even known there was such a process…), he said, “I don’t think there’s an issue with your bird… half the committee has been here and seen it…” Too cool.


When it poured rain, we invited people in to watch from the windows. Who leaves company standing in the weather? And they were GRATEFUL. As someone said…”It hardly feels like birding to be warm and dry. Usually, we’re wet, cold or hot, covered with bugs, trudging through mud or brambles…” As we were marveling at all this on a family chat line, a distant niece pointed out that we ourselves had happily driven to Dublin OH in the middle of August to stand in the sun and see Barack Obama. It all depends on which rare bird excites you, I suppose.


We learned about Greg Miller’s movie, and what a Big Year was. And a Big Sit. And a Century List. And the difference between all kinds of life lists… state, nation and world. World… Bernie Master. He was here… the patient guy who spent an hour peeking around the corner of the greenhouse, with the world’s biggest camera lens. We had never before heard the phrase “on the bird”, and were glad to learn it meant seeing not squashing. We learned that lots of Amish are birders. Bruce Glick came twice from Holmes County, and each visit was a phone booth sight gag. How many tall polite Amish boys can fit in a van? We learned that hard core birders tend to have other interests… butterflies, wild flowers, orchids, dragonflies, fascinating day jobs in museums, nature centers, universities.


More than one hundred people have visited, from as far away as Sandusky, Cincinnati, Findley and West Virginia.


And through it all, this bright little bird remains predictable, obliging, gorgeous. He’s not our bird, but we just love his small feathery self. No one has left disappointed. For us, the best part has been what happens when the oriole appears. Every face breaks out in a grin. Sometimes people laugh out loud. Small moments of joy and delight have soaked into our land, our living room, our hearts. For us, it is not so much the rare bird, as the experience of something so wholly, simply good and happy.


It seems unlikely that we will host another rare bird, but we’d be thrilled to do this again. We have met the greatest people… articulate and funny, polite and appreciative, all part of the lively peripatetic world of dedicated Ohio birders. By the most random happenstance, we were in the position to bring enormous pleasure to dozens of people, with no effort on our part. Thanks to you all. We’ve had a blast! And he’s still here.