The Holy Grail of Ohio Rails

Birds in the family Rallidae, or rails, are notoriously secretive. They live and breed in wetlands, a habitat which is difficult to bird.  Scientists and hunters who frequent the marshes during fall migration tell me they are numerous.  So why are they so hard for birders to see?

Birders are willing to travel many miles and stand for hours for an opportunity to see a King Rail in Ohio.  Are King Rails that rare, or are they just difficult for the novice to find?  Since rails are generally limited to wetlands, and Ohio has lost 90-93% of our wetlands, would it be surprising if rail populations are also limited?


The best way for a birder to see more rails, is to support the scientific endeavors to study them. Black Swamp Bird Observatory has been conducting studies on rails in the Lake Erie Marsh for many years.  Biologist Mark Shieldcastle will be telling the story of BSBO's study during the Fall "Rally for Rails" being held in Lakeside. 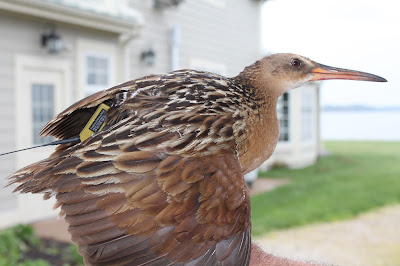 A very large King Rail study has been going on at Winous Point Marsh Conservancy.  Transmitters have been attached to King Rails to help scientists better understand their migratory movements, life history- and possibly shed light on the sheer numbers of their population.

The Soras and Virginia Rails are outfitted with a much less expensive transmitter that helps to track their localized movements within the marsh.  This helps the team understand preferred habitats and life history while present in Ohio's marshes.

These scientists at Winous Point take their jobs very seriously.  The birds are treated with the utmost care while being weighed, measured and fitted with tracking devices. Good information is reliant upon healthy and normally functioning birds.  The primary goal is to gather information with the least disturbance to the population.

Soras are one of Ohio's more abundant rails.  Other better known Rallidae, or at least one more frequently seen by birders, are coots and gallinules.  Because King and Virginia Rails are difficult to monitor visually, the tracking devices are providing needed information about those populations.

The transmitters are attached to a harness, much like a micro-backpack.  The biologists gently work the harness onto the bird and double check to assure the bird's wing movement is not restricted.  The bird's feathers settle back around the harness.  The actions and walking gait of a recently "harnessed" bird appear normal and unencumbered.

Brendan Shirkey will be sharing more details about the work of Winous Point and the Marsh Conservancy at the Ohio Ornithological Society's "Rally for Rails."  It will be held in conjunction with our fall Annual Meeting in Lakeside, Ohio.  Registration is now on line at http://ohiobirds.org/category/rails/#

Special funds generated by this program for the conservation and study of rails will be directly applied to programs designed to conserve these wonderfully secretive birds.
Posted by Weedpicker Cheryl at Sunday, June 05, 2016 No comments: