Kentucky: Naturalists get an early jump on spring.

In April the naturalists get an itch to go south to meet the on-coming spring.  We just can't wait another day!   About 12 of us headed down to Jenny Wiley State Park near Prestonburg, Kentucky.

A southern species, found only on the southern most locations in Ohio, Crossvine was ever present.  A sun-lover, it winds up to the tree top canopy to rain individual florets upon the forest floor.  We spent lots of time looking up.


We also looked down, at the Eastern Fence Lizard, Sceloparus indulatus.  This handsome guy was enjoying a little sunbath as well.  He was a hefty guy of nearly a foot in length,  with a tinge of blue at the throat. He should impress the lady lizards.

Next, we are out on a limb. That's where you'll find the Pinxter Flower, Rhododendron periclymenoides. It is a showy pink azalea confined to southern states-and the Appalachian regions of Ohio. Take time to smell this one. Heavenly!

Our hiking hero, Jim Davidson, and his wife, Sandy,  are still burning up the trails in their eighties! Well, maybe not exactly "burning up," but they are definitely out for a pleasant morning shuffle. 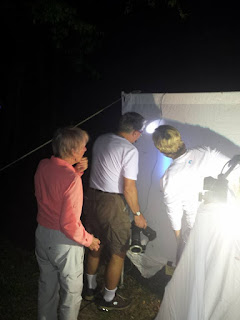 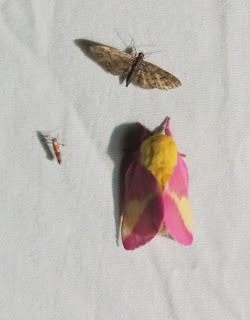 Anytime Greg Ratterman is involved, there will be black lights and mothing!  We enjoyed see what was flying on all three nights. All sizes and shapes were present and accounted for.  We had a high count of seven Rosy Maple (Dryocampa rubicunda) Moths in their full pink and yellow glory.


We bid you good-night as Mr. Bug basks in the light filtered by a Luna Moth.  Not a bad way to end the day...

Posted by Weedpicker Cheryl at Tuesday, April 26, 2016 No comments:

Many authors occupy space on my shelves.  Wendell Berry has moved my heart, but Joan Maloof has moved my feet. After reading Maloof's "Among the Ancients" I had to go see the last remains of our Old-Growth Forests: Cathedral Woods West Virginia, George Washington Nation Forest in Virginia, Cook Forest Pennsylvania, Congaree National Park in South Carolina, and Ohio's own Johnson Woods.

Only by immersing ourselves into true Old-Growth Forests can we measure what we have lost.  These forests boast of many species and great biodiversity.  Well-fed chipmunks and birds scamper across rotting logs that are protein rich in beetle larva. The hydrology is deeper, moister. Wildflowers respond in abundance to the sponge-like humus of the forest floor. the woodland fungi run unseen, beneath the leaf-covered forest floor and bind together the rotting bark.  These fungal components of our forest play important roles in the ongoing drama.  They are the communication system called the "woods wide web."  This tree communication system draws forth nutrients and sends out signals of impending attack.  No need for Druids or sprites in a forest, the fungi help trees "talk" to each other through their entangled roots.  It may stretch our limited imaginations, but scientists are documenting this "web" in current studies. 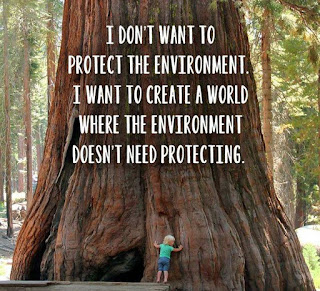 Breath deeply in an Old-Growth Forest... the Japanese call this "deep forest bathing" of Shinrin-yoku.  The documented health benefits include lowered blood pressure, boosted immune system, stress reduction, increased energy level, and improved sleep.  You too, will probably feel better taking deep breaths in an Old-Growth Forest.  It is part of our DNA.

Ohio has but a handful of these protected forests. Mohican has the Clear Fork State Nature Preserve.  Johnson Woods near Wooster offers a peek into our past. Dysart Woods near Belmont remains lauded, but endangered by underground mining. Ohio wold benefit by setting aside more sites like these.

One walk in an Old-Growth Forest teaches anyone attuned to nature the vast difference between 100-200 year old forests and the single-species woodlots used for timber production.  Wood lots for timber production are as important as any other type of farm, but forests only begin to reach their true potential with the passage of time.

A visit to witness astounding, centuries-old trees commune in a natural Old-Growth Forest is an experience one long remembers.  Never again will you believe "woods can 'over-mature'." 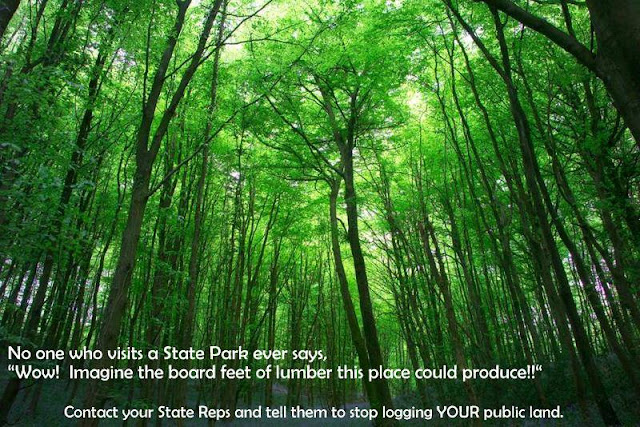 Posted by Weedpicker Cheryl at Friday, April 15, 2016 No comments:

Land of the Giants: Dysart Woods

If ever an Ohio forest reached a level of fame, it would be the embattled Dysart Woods near Belmont.  The largest stretch of untimbered woods in southeast Ohio has long been a battle ground for conservation.  The original owners wanted it preserved and sold it to The Nature Conservancy 1962. However, the mineral rights were recently held up in Ohio's court as subject to the claims of a coal mine, deep beneath the forest.

Fifty of the 455 acres in the parcel are "original forest" according to TNC's publication.  Original forest is another way of saying old-growth forest.  It is a forest of significant age, more than 100 years old and possibly much, much older. "Original forest" suggests the land has never been timbered.


Dysart is the land of the Giants as advertised on the brochure at the welcome kiosk.  While I have seen trees both bigger and older than those in Dysart, it is still a mighty impressive forest. Hikers have a choice of trails. The forest viewed from the red trail seems a bit higher in quality than the blue trail, but either provide a pleasant walk in the woods.

Dysart Woods is mostly comprised of tulip tree, beech, and oaks- both red and white. Spring wildflowers were greening the forest floor, but they were delayed by our early April chill.  Mayapples, Dutchmen's britches and violets were all starting to poke through the forest duff.

A hallmark of an old-growth forest is a mixed age of trees.  Not only were there giants, an abundance of mid-sized and young trees also grow in the stand.  While the oldest of giants, like fallen soldiers, lay upon the ground. Decay is a decades-long process in trees of this size.  The forest depends on the fungus and beetles to break down wood fibers. Hungry fauna will assist the destruction by clawing or pecking those grub-laden logs. But this decay is part of the greater good. It feeds the forest.

High in the tree tops above, Red Maple bloomed and catkins were forming.  We found a branch with immature green catkins and pondered its possibilities.  It just didn't add up. What could it be?


Fortunately, as the trail dumped us out of the woods, we came upon a friendly pair of ecologists. Robert and Hunter Wiley were surveying a nearby field which has been part of an on-going American Chestnut study by Ohio University.  They easily recognized our catkins when plied by our curiosity.  The vegetation was from a chestnut tree! The Wileys knew of several growing down in the forest we had hiked.

To a weedpicker like me, it felt like winning the lottery!  No wonder I didn't recognize the immature tree. Since American Chestnuts were virtually wiped out by a disease 60 plus years ago, my experience with them is very limited. It sure made me smile to think a young forester's efforts to replant chestnuts in Dysart were starting to pay off.  Oh, to live long enough to see that tree unfurling its white flower-lined catkins high above the other hardwoods!

As the Wileys set about their work, we wandered back down the road from which we had come. Our steps were a little lighter as optimism filled the air. Maybe, someday, this forest would once again boast chestnuts.

Its not a perfect world and I wish O.U.'s main planting on the hill was a more biodiverse setting.  To me, finding a chestnut reintegrated into a woodland is far more exciting than an unnatural looking monoculture planting. Still, high from from finding a chestnut hidden within the forest, my mood was elevated beyond my own over-analyzing. Good news in any form, is good news indeed.

Can there be any better news than American Chestnuts growing in Appalachia?  It feels like a well-deserved win for Dysart to me.