There was no limit to the good times being had in Shawnee State Park and Forest during the Ohio Ornithological Society's 11th Annual Conference.  It was cool and often cloudy, but our spirits were not dampened.


Tim Colborn was the bird leader on our field trip, Birds and Butterflies. Tim expertly led us though the low lands and forest, accruing a decent bird list in spite of some overcast and occasionally downright wet weather.

We had some great looks at a Worm-eating warbler and this female Purple Finch who was vocalizing from an elm tree.  She was burbling her little heart away and  might have been mistaken for a young male- due to all of that song.  But fortunately for our group, Wil Hershberger was along and knew exactly who we were dealing with.  In fact, he was somewhat impressed by the efforts of this female.

Our group was wondering what type of tree that finch was perched in.  Those nearly floral-like seeds were throwing me for a loop.  They looked to be an elm, but quite unlike the American Elms with which I have a familiarity.

Daniel Boone (yep, he is related to the one-and-only) and Andrew Lane Gibson set me straight. The Slippery Elm, sometimes called Red Elm,  Ulmus rubra has very robust seed grouped in large clusters. Thanks to that Purple Finch, we gained a botany lesson as well!

This is a good time to explain that author, Wil Hershberger, was our conference keynote speaker.  He gave an amazing program on the songs of birds and his recordings were a joy to hear. His expertise in the field of sound recording is undeniable and his field knowledge: encyclopedic.

Lisa Rainsong also spoke on bird song during the break out sessions of the conference.  She was amazing as usual, and the other offering was Andrew Gibson's program on Orchids.  Being the weedpicker that I am, it was my privilege to introduce Andrew's program and see his gorgeous orchid photos.

The late afternoon speaker was the OOS' past-president, Jim McCormac.  He delighted the audience with photos of birds and all other manner of nature.  He taught us quite a few tips, which should improve our photos from the field.

We heard and saw a myriad of singing birds, but butterflies were a little harder to produce.  The temperatures were downright unfriendly to them, as lepidoptera are flightless under 50 or so degrees.

However, one sharp eyed member of our group found this Tiger Swallowtail going for a swim in a mud-puddle.  She thought it was dead, until the temperature of her hands warm the poor fellow's body temperature.  Once it started to crawl around a bit it was passed off to me. Our group showed proper admiration for its stamina.  After our close inspection he was safely retired to a nearby hemlock tree.

Although we were near skunked on butterflies, both days we were able to get good views of Eastern tent caterpillars.  The pre-moth life forms live communally in a white, sticky "tent" and tend to specialize on wild cherry trees.  Viewing them though a reversed binocular allowed our folks to see the stiff hairs which make them unpalatable to most birds.  However, the Baltimore Oriole and both Cuckoo species are known to whack them about to remove the hairs before eating them. So even our lepidopteran studies were placed into a birding context.


The beauty of Shawnee is startling, with picturesque natural stream-beds where nature abounds.  Yet it is a fragile ecosystem which deserves our concern and protection.  It is subject to invasive plants, insect and even bird species when the canopy of the forest is pried open by man. Subtle changes in road maintenance, forestry practices and mowing have profound results on the land.  Most of those results are negative, like erosion, siltation of streams and reduction of biodiversity.  Our treatment of this very special land should be gentle. We will want to leave something beautiful for our children, and their children to visit as spring unfolds in the decades and centuries to come.

These babbling brooks with flowering banks, the morning song of birds and the flight of colorful butterflies should make us reflect upon the honor endowed to our species.  We were given the ability to care for this land.

Let us not disappoint.
Posted by Weedpicker Cheryl at Tuesday, April 28, 2015 3 comments:

Recently asked if I had any hobbies or unusual interests, it came to me: I like to chase big trees. Most folks understand if you want to chase rare birds, or keep a list of plants or animals in your yard, county or state.  Although big trees don't present a challenge by moving around, the Old Growth trees are harder to find than one might imagine.

Since most of our American trees have been cut over once or twice by now, any area with 200 year old-plus trees is a stand-out worth protecting for future generations.

In Ohio, Johnson Woods near Orville is one of our better examples of an Old Growth Forest. The Clear Fork State Nature Preserve in Mohican Forest also has some very old White Pine and Eastern Hemlock which are protected from timbering.  Old Growth Forests are the rarest wooded habitat left in Ohio, with only a handful of places qualifying. Any grove of ancient trees is worth protecting for posterity.


Whenever I travel, I actively search for old trees.  One stunning example was this Monterey Cypress,  Cupressus macrocarpa in Caramel. These ocean-side giants have a silent beauty all of their own.  I recently read of an even more famous Monterey Cypress at Pebble Beach near the golf course.  You can bet I will seek it out on my next trip to California.

The Coastal Redwoods, Sequoia sempervirens at Julia Pfeiffer Burns State Park near Big Sur are not the largest or most impressive Redwoods to be found.  However, they are the only Redwoods within my travel zone, and I was thrilled to commune with them.  Saying these giant trees are not "the largest" is much like complaining your line-backer is only 250 lbs.  That is still plenty big.

The only worthy complaint about trees this size is the difficulty they present in getting a meaningful photo.  One can either shoot the top or the trunk, but rarely can an amateur photographer make an actual reflection of their enormous size. 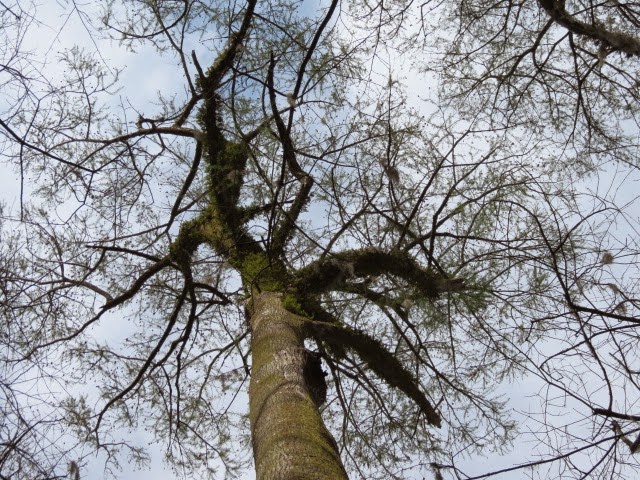 If seeking out big trees appeals to you, the Congaree National Park near Columbia, South Carolinia could be your Nirvana.  The giant Water Tupelo, Nyssa aquatica are one of the smaller "big trees" but the erratically shaped tops remind us of our much smaller  Blackgum, Nyssa sylvatica which we know in Ohio.  Like many aquatic trees, the buttressed base of this Tupelo is enlarged and appears swollen. 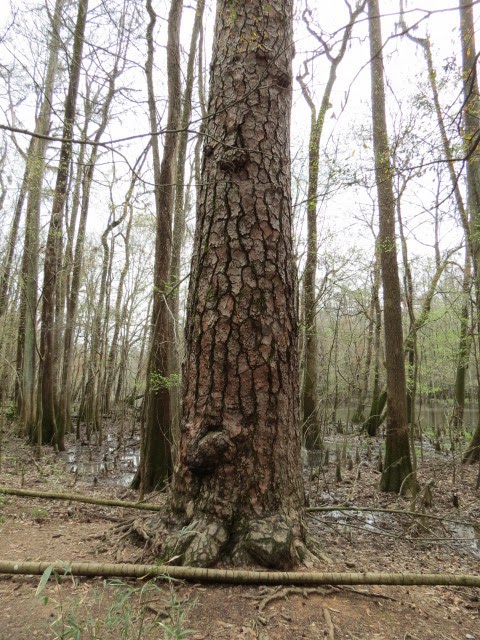 A past State Champion Loblolly Pine in Congaree.

Once thought to be the largest Loblolly Pine, Pinus taeda in South Carolina, this grand tree stands at over 150 feet tall and is the former State Champion.  It is easily found, adjacent to the raised boardwalk at Congaree, where the new Grand Champ is off the beaten path.  A personal photo of mine shows that large knot to be slightly below my shoulder level. Figure that knot at five foot tall and the trunk at least 15 foot around.


There are plenty of Bald Cypress, Taxoduim distichum to be found in Congaree, but my current favorite is located in Corkscrew Swamp, near Naples, Florida.  It is named after conservationist John Muir. Their are numerous Cypress marked along the boardwalk, each grander than the next.  This preserve is operated as an Audubon refuge, but I was too distracted by the trees to do much birding. Good thing I had Greg Miller along on this trip to keep me on track!

Just this week I noted a grand dame in Lakeside, Ohio.  This Eastern Cottonwood, Populus deltoides is not our state champion, but it certainly attracted my admiration.  Again, it is so large one can scarcely take in the whole thing. One might guess this tree was on the shore of Lakeside long ago when the first Methodists came to town.  It is a worthy piece of natural history in this Historic Landmark and Chautauqua.

Just for a size comparison I wrapped my arms around the curves of one half of this mighty giant.  It wouldn't qualify as a champion tree with the duel trunks. However, it is no less impressive to me.   It would take four or five people to successfully link hands around this tree. Cottonwoods are a relatively fast growing tree, so this is probably much younger than the smaller, but still impressive oaks and hickories found throughout Lakeside.

If trees could talk, we might gain a better perspective of all that the aged carbon-based life forms have witnessed.  Some were here when the pilgrims landed at Plymouth Rock. Others were present for the French and Indian Wars, and during O. H. Perry's Battle for Lake Erie.

If we could listen to their experiences,  we might gain a little wisdom from these giant, living, breathing wonders.  I am humbled in their presence and always looking forward to meeting another big tree.
Posted by Weedpicker Cheryl at Wednesday, April 08, 2015 No comments: 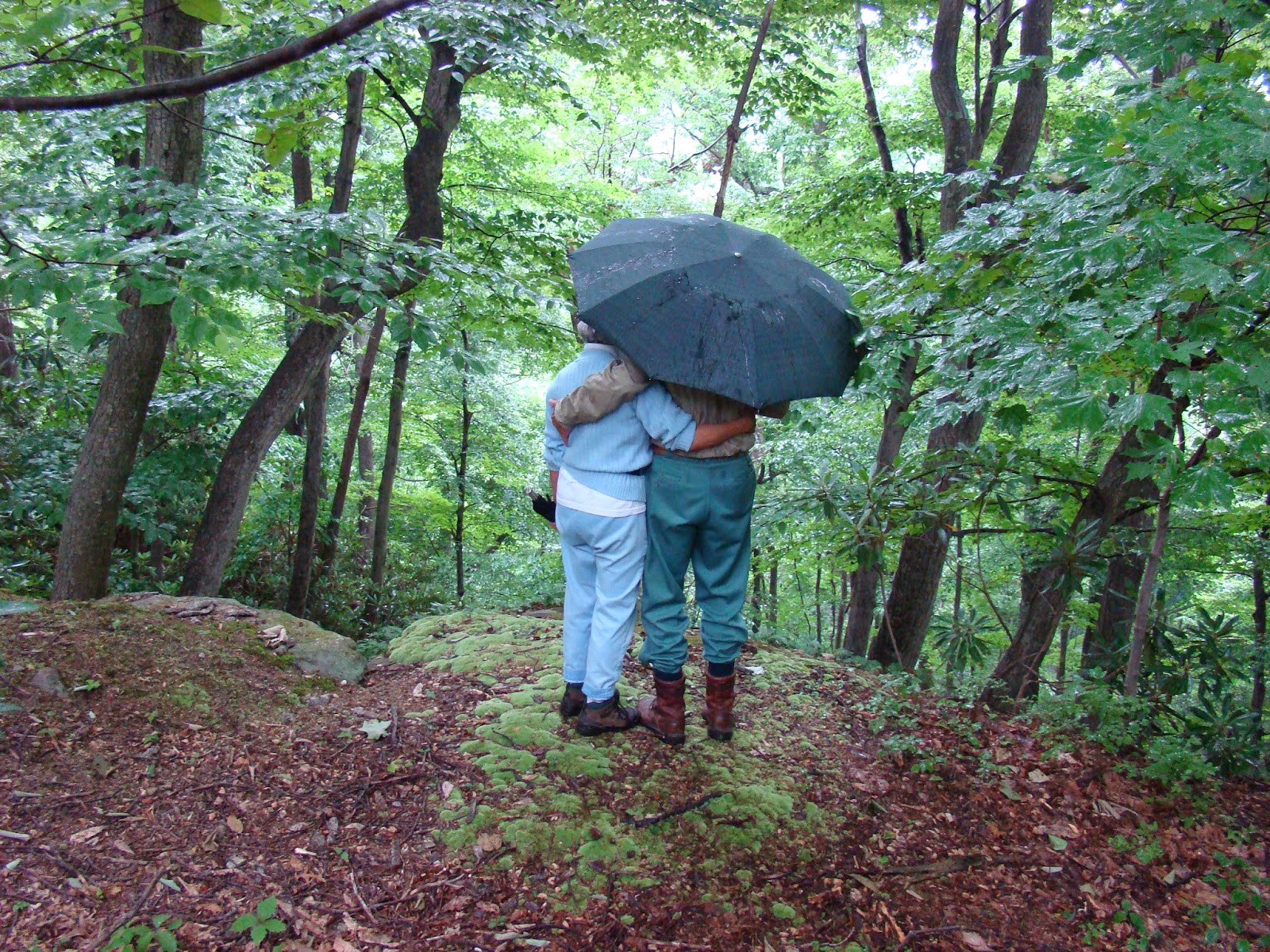 Rain dancing down forest leaves,
to splatter soft on moss and rock.

Armed only with umbrella,
we risk the elements -with glee.

All grown up and still,
not enough sense to stay in.

Posted by Weedpicker Cheryl at Friday, April 03, 2015 No comments: