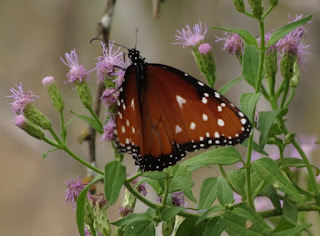 Texas is filled with specialities for the engaged naturalist.  I've only featured a small number of the birds we enjoyed and only one insect.  But then again, the sign at Choke Canyon only promised birds.
Posted by Weedpicker Cheryl at Saturday, January 30, 2016 2 comments:

There is nothing like going to the beach in December!  Admittedly, it was a bit chilly, but we had no problem finding a place to park at the Gulf Coast's Mustang Island.

Personally, I find it a bit off-putting the way Texans make the beach their personal highway.  Cars on beaches don't make sense to me.  (Sorry Daytona, this goes for you too.)  Beaches are a living ecosystem supporting a wild diversity of marine and maritime life.  Unless, you drive cars on it all day- then the compacted sand can't support much of anything- other than beer cans and trash.

It was still a wonderful place to exercise our legs, gather sea shells and study the jellyfish stranded on shore.  Dealing with high wind and 50 degrees isn't that big of a trade off in my mind.

Mustang Island board of tourism would probably like me to remind you that this is the "Riviera of Texas."  You can google around and find plenty of people enjoying these beaches in much warmer weather, but you wont find me there!

We enjoyed ourselves immensely.  The restaurant at the top of the Bob Hall Pier was open and served all of our favorite beverages along with a decent lunch.  They had a few heaters running but the big over-head doors that serve as windows onto the water had to remain closed.  It is best I am not distracted by birds during lunch, anyway.

A very handsome shore bird was putting on a good show.  This bird certainly looked like a Willet, but it seemed big to me.  My enjoyment of nature always multiplies when I get to study the photos later.  I learned that Texas' fall Willets are often Western Willets, Tringa semipalmata inornata and considerably larger than the Willets we see on the North and East Coasts.  O'Brien, Crossley, and Karlson's The Shorebird Guide provided good commentary and photos on this topic. It is not a different species, but rather a subspecies of Willet, Tringa semipalmata.

A few miles down the road from Mustang Island the road becomes less congested.  The tourists soon realize the warning of no gas-stations or restaurants were serious.  The Welcome sign to Padre Island brags the people came here, Native Indians, explores, and ranchers- but nobody stays.  Mostly this Island is the undeveloped National Seashore. In fact, it is hailed as the longest undeveloped barrier seashore in the world. Some might say it is "wasted land."  Hardly. As an ecosystem it is a vibrant maritime grassland, supporting a wealth of fauna and flora.  Unique flora often harbors unique fauna, and the Padre is no exception.  From Kemp's ridley sea turtles to the endangered Whooping Cranes,  rare species are found here.

Whoa!!  What is that giant white bird in the middle of a flock of Sandhill Cranes?  We have spotted a Whooping Crane!  That was an unexpected find, but a great feeling to know we had seen something very special.

If you would like to know more about Whooping Crane conservation and the on-going battle to protect them from extinction, please click on the photo below to go to the International Crane Foundation website.  Thank You. 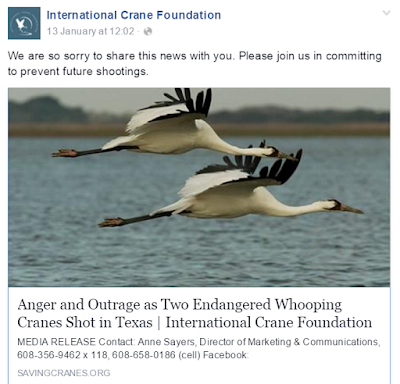 Posted by Weedpicker Cheryl at Friday, January 15, 2016 No comments:

If you don't bird well, then at least bird big.  That's my personal theory on birding in Texas.

Christmas break presented an opportunity to spend time with my favorite non-birders for a vacation in Texas.  To win them over to wing-watching, I planned to go big.  Really big, like the endangered Whooping Crane, Grus americana. At nearly five foot tall, they are an impressive sight and easily the tallest of all North American birds.

Thankfully we have National Wildlife Refuges set aside for the protection and management of American wildlife.  Aransus NWR is officially out in the middle of no-where and about an hour drive from the hotels at Aransus Pass.  It is well worth that drive to see native Whooping Cranes doing the things Whooping Cranes do.  Even a non-birder is going to warm up to this gianormous white bird wading around in alligator infested wetlands eating crabs and alligator babies.  Now that's a bad-ass bird.

You can keep your outlet mall shopping, this is my idea of a good time!

It was pouring rain most of that day, so hiking and photography conditions were sub-optimal. On the way back to town we stopped at Goose Island, a Texas State Park.  While wandering around the back roads, we came across this scene of Whooping Cranes and cattle.  They were a good eighth of a mile from the road, so this was the best shot I could procure in the rain and wind.  Note: the cow in the back ground has a Cattle Egret riding on its back.

Whooping Cranes came close to joining the Dodos in extinction land.  This Texas population (currently about 250 birds) is the last native Whooping Cranes in the U.S.  There are some newly established Whoopers in Louisiana and a population is being encouraged in Florida.  Some very dedicated people are working hard to help this species remain genetically viable and provide wintering grounds. Go to www.operation migration to learn more.

An unexpected pleasure was around the next bend, as we just followed the signs to "The Big Tree." This giant Coastal Live Oak, Quercus virginiana is obviously revered by the locals and tourists alike. The Civilian Conservation Corp built that low fence back in the 1930s to protect the tree from soil compaction by the adoring visitors.  This thousand years old tree stood on the Texas coast when the pilgrims landed at Plymouth Rock.  It stood through the Civil War. It continues today, although it relies on a few crutches and braces to help it through.

If a visit to Aransus is in you future, allow time to visit this monumental tree.  It was one of my fondest highlights on the trip to Texas.

A Resolution to Admire

Every New Year's seems to bring the same self-serving resolutions.  We've all heard them: diet, exercise, lose weight, eat healthier, drink less alcohol, cut carbs, cut sugar, cut negativity.  By the second week of January those resolutions are barely holding on, or have completely gone the way of the Dodo.

I would only bet on one person to make her resolution stick until next year. Michelle Goodman vowed to "pick up a bag of trash each day" this year.  Everyday. Or, in case she has a productive day of five or six bags, she can "bank" those days for later.  The ultimate result is 365 bags of free-floating trash will be removed from natural areas and along roadsides.  Her good deeds are most likely to occur in Texas where she lives, but she will also continue to ply her resolution on vacations and travel near and far.

Shelly is bound to make this resolution last.  Picking up trash is already a way of life for her.  She makes every place she goes better for her visit.  We know she will stick to this resolution, as a more determined person has never lived. She already diets, exercises and eats right.  She is a paramount of positivity. Shelly already has all those other things going for her.

I'd like to say it is in her gene pool. Her grand-father, John, is the great grand-daddy of litter pick-up and good deeds in his neighborhood, too. These folks are the personification of their tidy German genes.

The New Year has begun.  Now I resist making resolutions I can't keep, as I have a lifetime of January failures. But good deeds don't need a schedule, every day can be a new beginning.  So let's all try to follow Shelly's example and make our world a better place, bag by bag.  It can be a grocery sack or a kitchen garbage bag.  If your feeling particularly spry, get out the giant Hefty!

Weedpicker's goal for 2016 includes gathering more bags of byway trash.  Just don't be surprised if some of those trash bags have invasive plants stuck into them, too.

PS.  May I tell you just how proud I am of my kid?
Posted by Weedpicker Cheryl at Wednesday, January 06, 2016 No comments: