Too often, in our efforts to solve a problem, we forget the big picture.  When it comes to forests infested with Gypsy moths, an invasive species which infests 500 species of trees, some foresters are willing to kill them at any cost.

Our native butterflies and moths are often "collateral damage."  They are not the targeted species, but the BtK or favorite poison-of-the-year is not species selective.  All butterfly or moth caterpillars in the treated area die.

Trees are used by caterpillars and caterpillars are a primary source of food for birds feeding young. There is an entire food web to consider.  Our forests are ecosystems in which many species are dependent upon another.  However, too often our public officials treat our forests as a "tree farm" for timber products only.  Selectively treating for one "problem" species can create a cascade of unwanted consequences.

Many environmentally conscious groups voiced concern over last years use of BtK on Gypsy moths.  It is non-selective and can kill many species of butterflies and moths. It is a cheaper fix with a much higher long-term cost. Ohio Lepidopterist Society urged Forestry to use only mating-disrupting pheromones or Gypchek. These two products specifically target Gypsy moth.

For this year at least, the use of BtK has been halted.  So let's use this very short comment period to thank Forestry for being more pro-ecosystem in 2016!
You can down load a PDF comment sheet at   http://www.flora-quest.com/butterflies.html
Thank you for helping us remind Forestry, we care about our ecosystems, including insects! The decline of butterflies and moths has been well documented all across the United States.  Help us "treat the problem" of gypsy moth without impacting all of the beneficial native species as well.  It may cost a few dollars more, but our forests are worth it.

The national news might have you convinced that America is almost a lost cause. Not true! If the political debates or racial injustices are getting you down, here is a flash of good news.

America was the first nation to ever set aside land for the people.  The National Parks are the people's parks. In the same spirit of preservation and protection for the enjoyment of future generations, America also set-aside National Wildlife Refuges.  These lands belong to all of the citizens of America and we all benefit from their protection.

National Wildlife Refuges preserve dynamic landscapes set aside for wildlife and the enjoyment thereof.  Ottawa NWR is the largest wetlands remaining in Ohio. It was once part of a gigantic complex called the Great Black Swamp.  For millennia these wetland "swamps" have provided breeding, nesting and migratory passage stop-overs for hundreds of species of birds, mammals and even butterflies.

Without protection, these vital wetlands which cleanse our ground water and provide habitat for wildlife would no longer exist.  Ohio has lost somewhere between 90-94% of our wetlands.  Some have been lost to development, but much of it was drained, tiled and tilled for agriculture.  It should be no surprise that our once common wetland birds and insects have suffered losses as a direct result.

The National Wildlife Refuges are lands all across our great country, providing eco-services for our wildlife and scientific research opportunities.  They are dedicated to connecting Americans to the natural wonders which were once common. Many of those species are struggling to survive. Too often they have become wildlife's last resort.  These refuges have become the Alamo of our last natural lands.

We cannot let greed or lack of awareness destroy the lands set aside and managed to provide habitat for wildlife displaced by development, cattle or corn. Yes, we need farms and cities to provide habitat and food for people.  But we cannot afford them at the expense wild species we have yet to study and barely understand. The lessons provided by these species should be early warning system for us. 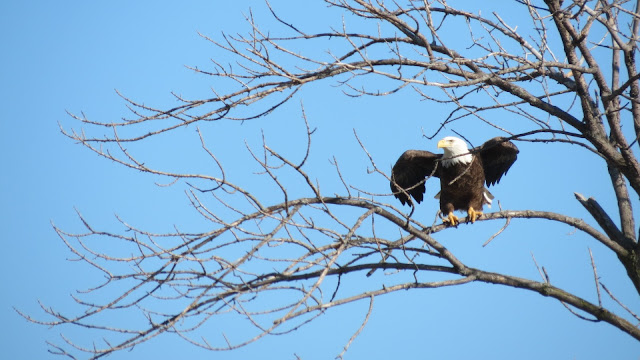 The lesson from our National emblem, the Bald Eagle:

Within my lifetime, we nearly lost the very species used to represent this great nation. How little we understood the impacts of DDT.  We carelessly spread it upon our lands and waters with no thought for the long-term impacts.  When scientists warned of the dangers, they were rebuffed and personally humiliated. We seem to reject the messengers of bad news, as if that could change the course of history.

Ohio was the epicenter in the reintroduction and study of Bald Eagles. We learned that the fragility of their eggs was caused by DDT and it was banned our farms and cities. Forty years later, we now have a thriving population of eagles.

Hopefully, today we better understand the implications of the chemicals we use.  Ottawa National Wildlife Refuge could rightfully be called "home of the screaming eagles" and a laboratory for the birds.  It is not just about hunting and waterfowl, but the hunters have certainly paid for much of those conservation lands we enjoy.

The our native Ohio vegetation is also protected by this great refuge.  Both the rarely known aquatic species and the terrestrial wetland gems that provide food for insects and seed for birds are found in abundance.  Therefore, our Ottawa National Wildlife Refuge is also is a hot spot for wetland butterflies and dragonflies. We have reports of the occasional rarities, too!  Few years back I wrote a blog featuring ONWR butterflies and you can find it at: Ottawa NWR: A Copper Mine

Posted by Weedpicker Cheryl at Monday, February 01, 2016 No comments: