This week the Division of Wildlife held their annual Wildlife Diversity Partners' meetings.  It is an opportunity for the birders, butterfliers, snake handlers and nature center representatives from all across Ohio to get together and share ideas and learn the latest offerings by Division of Wildlife.

We also vote on the photo that will be on the Wildlife Diversity Stamp.  This year's winner is a garter snake, but oh, what a snake it is!  You'll be proud to display it as a sign of your commitment to non-game species being helped by Wildlife dollars in Ohio.

We also took a tour of a wetland complex the Toledo Metroparks has teamed with the Division of Wildlife to create.  Next spring when you are at Magee Marsh and Ottawa National Wildlife Refuge, go a few miles more to the west and your find the newly created Howard Marsh Metropark.

If you drive down the causeway at Metzer Marsh, look to the west and you'll see some newly created impoundments and water handling systems.

The sign for Howard Marsh includes the many partners that have given this 700 acre project a boost. 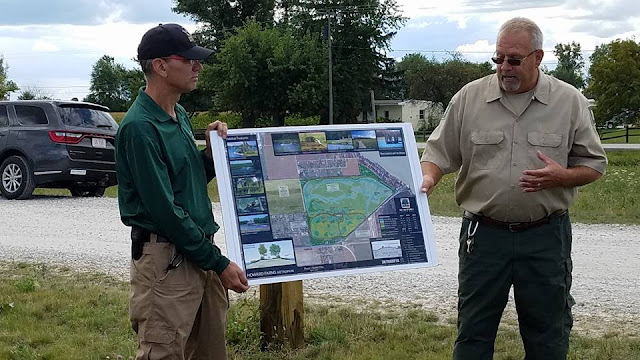 Dave Sherman from Division of Wildlife and Dennis Franklin from Toledo Metroparks carefully explained the project with the aid of detailed map and artist's renderings.

Wetlands are filled with biodiversity, from the blue Asian day-lilies to the myriad of dragonflies species that will immediately begin to use the impounded water as breeding grounds.  Wetlands are the cradle of life in northwestern Ohio.

Wetlands reflect light and color back to the cloud-filled skies on a September afternoon.  If you aren't a huge fan of wetlands yet, just try spending one afternoon in their appreciation.  Once you've found a couple frogs and hear the Sandhill Cranes calling as they wing across the sky... you may never be the same again.
Posted by Weedpicker Cheryl at Thursday, September 07, 2017 No comments: