Tales from the Marsh Part 1.

Meadowbrook Marsh is brimming with life, and death. Everything is nature is connected by a fine cord, according to John Muir, and life is interwoven with death and decay. If one looks closely at a so-called dead tree, he might be surprised with the variety of life forms displayed. 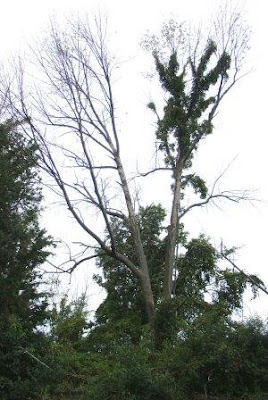 Standing timber or firewood to some, but in reality, a micro-forest of diversity can thrive on this tree. From the berries on an obvious-at-a-distant Virginia Creeper, Parthenocissus quinquefolia to the pin-head sized grubs buried in the bark, dead trees provide sustenance to birds, squirrels and a multitude of lesser life-forms. 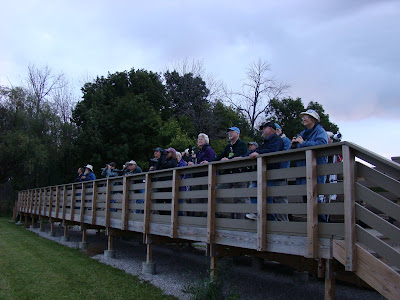 Bird watchers filled the platform at Meadowbrook Marsh during Midwest Birding Symposium. Dead ash trees are numerous in the wood lot behind.

Humans seem to be the only animal unable to appreciate a standing dead tree. But perhaps birders are more highly evolved humans, as they often realise birds can be found in the open canopy of decay. Unfortunately, the number of dead trees in all of north-western Ohio is at a staggering high. 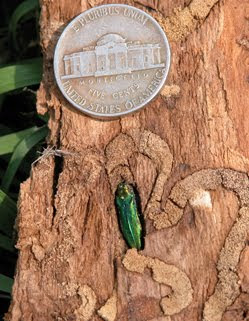 The Emerald Ash Borer (photo FDACS), uninvited guest from Asia has infested our ash trees, leaving trails of devastation and decline in our woodlots. The grubs of this emerald green beetle are impacting the management of city parks, neighborhood tree lawns and creating a boon for tree services everywhere. Certainly, dead trees can be hazardous in a populous community, but perhaps we should examine the broader implications in woodlots and natural areas. 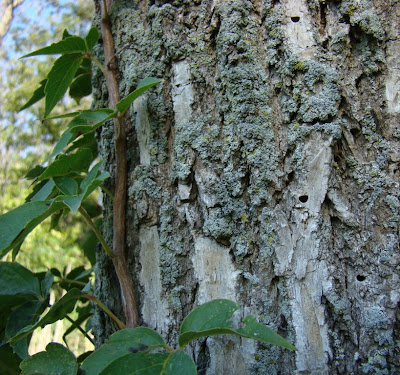 Those D-shaped exit holes are the telling tale. Soon the bark layer, will separate from the tree, revealing the channels grubs used and interrupted the water-service from the roots to the leaves. The cause of pre-mature death. But from this death springs life: fungi, ants, grubs go to work as decomposers. Meanwhile, berry festooned vines of ivy and grape feed flocks of migrating bird and provide life-support for wintering birds.

It is a micro-community in a high-rise tower. Woodpeckers are the winners. The Hairy and Downy rap out their beat, while Red-bellieds call from the tops of snags. It may be hard to remember so much life can come from death, but ask the birders. They already know.