Jumbo mushrooms are having a banner year! I have received several calls at Gorman Nature Center, and have encountered giants myself. Steve, from Blue Jay Barrens also encountered some last week. He commented they were as large as his boot, but he was not sure how they compared to my binoculars,(which I had photographed as a comparison to a Giant Puffball.) 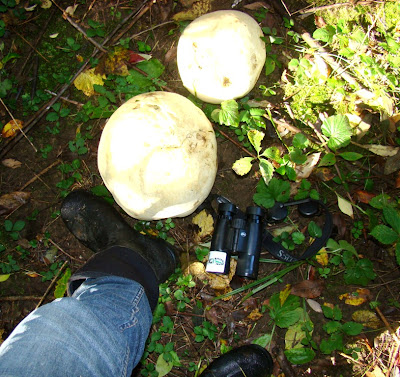 Boots and Binoculars with Giant 'Shrooms

I happened upon some more puffballs, but this time I am not so certain they are the harmless Calvatica gigantea species. If they were, they appeared to be well past prime, as the insides were gray and mushy.

There are at least two other varieties of "Earthballs" which generally look like the puffballs. However, these bad boys -Sclerodermas- are poisonous. Someone recently suggested we study more about mushrooms, but I would be hesitant suggest any mushroom was edible, especially after the headlines from last week: Man Who Ate Poisonous Mushrooms Shares Warning.

Seems several of his friends are hoping for new livers and they are not that easy to come by, unless you know med students who like to party.

So enjoy the looks of those robust mushrooms, but don't eat them unless you are an EXPERT!
Posted by Weedpicker Cheryl at Thursday, September 29, 2011