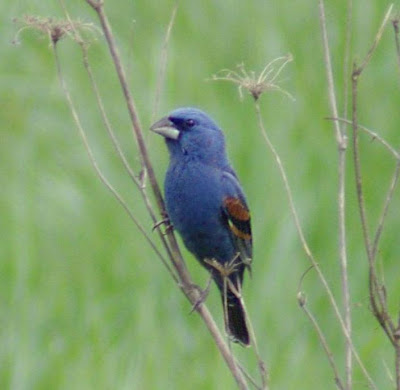 
The most sought-after non-flora on our weekend event was the Blue Grosbeak. At least two Quests produced views of these jumbo-headed Adam County specialities.

My first look at a Blue Grosbeak was during an Adams county trip at the 2006 OOS Conference held in Shawnee. We were thrilled with flickering glimpses of a dull brown female, while both Flora-Quests reported head on looks at a brilliant blue male. In fact, if you would like to see a Blue Grosbeak, there is a pair hanging about the Eulett Center. Now might be a great time to plan a trip to see that new building and pick up a life bird. 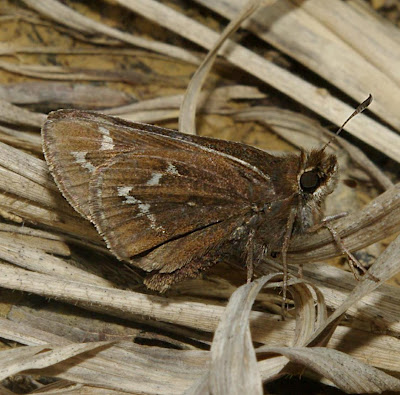 The butterfly enthusiasts had the toughest go of it, since the temps were pretty moderate. While they did not have huge numbers of sightings, this one rarity made up for it. What I would give to add a Cobweb Skipper to my life list! Not only did they see one- Jaret Daniels, with his incredible butterfly ju-ju caught it mid-air with his bare hands and produced a glass jar for better viewing. Jaret is amazing in the field, and the nicest guy you would ever want to meet. I bet he still walks little old ladies across the street like a boyscout!

More flora to come, but I couldn't help reporting the rarities first-

Posted by Weedpicker Cheryl at Wednesday, May 06, 2009