Perhaps more majestic than even the Monarch butterfly, the Regal Fritillary was once king of the grasslands in Ohio.  At one time, it was said to be found in all 88 of Ohio's counties.  No more.  There has not been a single sighting in Ohio since 1991. (J. Daniels (2004) Butterflies of Ohio)

The only remaining population in the east is found in Indiantown Gap, PA at the Fort Indiantown Gap National Guard Training Center.  These butterflies are constantly monitored, and their habitat is under strict study and management.  We'll have more of that story in the next post.


First we need to understand the intricate timing of the two sexes of fritillaries.  Regal Frits are univoltine (meaning one brooded), and the males emerge a week or two earlier than the females.  Often the males are rather tired looking by the time these fresh young females arrive on the scene.  It is all but impossible to tell the two apart, until they spread their wings.  Females have two rows of white dots at the lower wing margin. 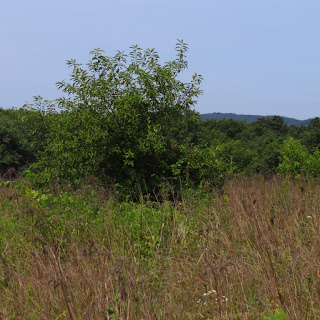 Once the ladies are on the scene the males have only one thing on their mind.  Males patrol around the open grass and any outlying shrubbery;  they are searching for the ladies.  We watched one dive under this bush, where he sat waiting- nearly undetectable.

He briefly opens his wings, just long enough to capture this shot of the hindwings which bear his signature- two colors on the black margin.  The bottom row of dots are orange and the upper markings are white.

Once the pair have mated, the female will lay up to 2,000 eggs.  Apparently she randomly distributes them throughout the grass, regardless of the presence of their host plant, violets.

Once the larva hatch, they must find their way to clumps of little bluestem, where they will winter beneath the ground, in the  larval stage. They re-emerge in the spring to feed on their host plants- violets.


Many species of fritillaries have similarly unusual life cycles, so this alone cannot account for the Regal's rarity. It is thought that loss of habitat is the main reason for their decline.  In Ohio we have lost over 99 % of our native grasslands.  Is it any wonder that we might have lost this Regal butterfly as well?
Posted by Weedpicker Cheryl at Monday, July 09, 2012