While concentrating on eradicating some non-natives from the prairie, we had to admire the biodiversity surrounding us. There were many indicators species of prairies, namely the four major grasses for Ohio prairies: Big Bluestem, Switch grass, Indian grass, and Prairie Cordgrass.

There were a host of native forbs and insects to admire as well. 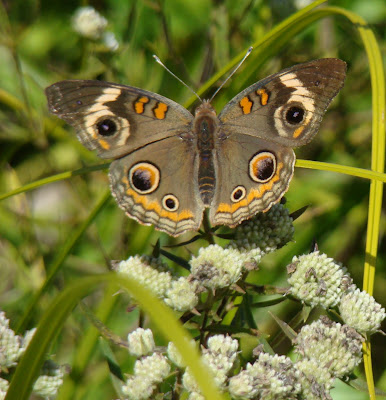 Everywhere we walked in Daughmer a deep scent of mint permeated the prairie. Since sheep were grazed at Daughmer from many years, it is fairly safe to assume sheep don't care to eat mountain mint. Several species of plants we would expect to see growing here are missing. Our conclusion: sheep found them "tasty."

The Common Buckeye butterflies were dancing from plant to plant, taking in the fragrance and nectar. 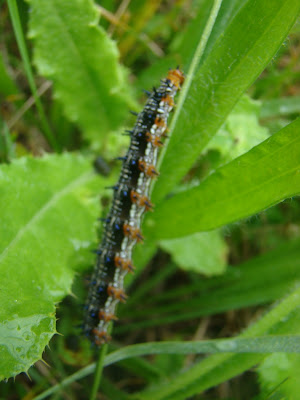 Just a couple of weeks ago, this Buckeye caterpillar was photographed at the same location. 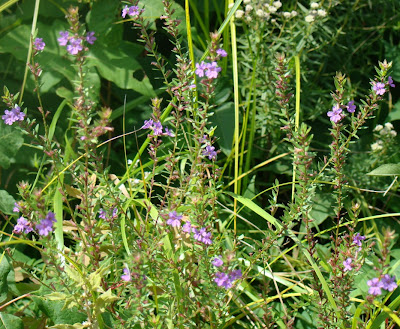 Winged Loosestrife, Lythrum alatum
Not all Loosestrife is bad! This petite member of the Loosestrife family is a native plant, well mannered and easily overlooked. Unlike its brassy cousin the invasive species, Winged Loosestrife has small, loose sprays of flowers. Apparently, sheep don't eat these either! 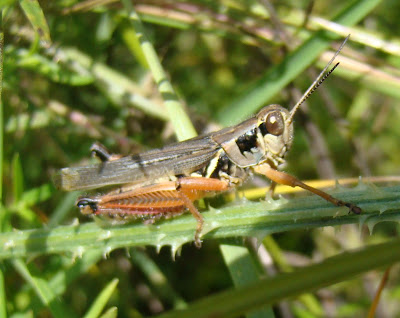 No, I did not make up this Latin name. But isn't it cool? Femur=leg rubrum= red

Bob Clips and I had a great time speculating on this boldly colored locust, then again, everything is interesting with Bob! He conducts milkweed pollination studies at Killdeer Plains and teaches at OSU Marion. He will be conducting some fun moss and lichen workshops this fall. You will want to watch for more information about those.