Miracle in the Marsh

Ohio's wetlands may be limited in size, but they are fascinating hotbeds of biodiversity. Absolutely a-buzz with dragonflies, bees, butterflies, singing insects and birds... and in May, Ohio hosted no less than 5 of these gaily colored swamp-chickens, Purple Gallinules. 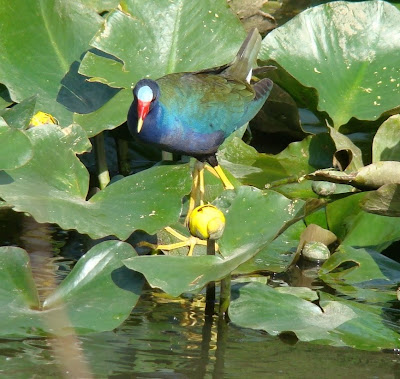 A spring storm may have been the catalyst, for after the weather cleared on May 4th there seemed to be a "purple rain" of southern birds. McCarty reported several in the Plain Dealer and hundreds of Ohio's birders streamed to Columbia Station see this Floridian as it scampered across the Yellow Pond-lily or "Spatterdock" Nuphar lutea. It was a dream come true for me, as I had nixed out on this bird twice in Florida. Now one was in my own state- and not just one!
...
And as I photographed this amazing find, I noticed the similarities between this habitat and one I frequently bird.


Bur-reed, Sparganium americanum is but one of the the wetland obligate species growing at Orweiler Road near Mansfield. Seen directly behind it, is our Spatterdock patch. So, why couldn't this be a fall-out location for these magical birds? I wasn't the only one wondering and checking, for soon John Herman of Crestline found not one- but two of these southerners cavorting in our marsh! 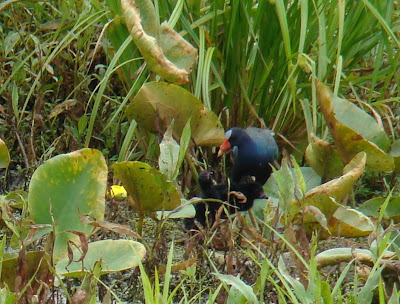 We wondered, was it possible? If we kept quiet long enough to give them a chance- could we be lucky enough to be hosting a pair? Word soon came that young had been spotted, and within days I spent a morning watching the little-bitty black chicks (look directly under the beak of the gallinule) forage beneath their parents. However these gallinules were no exhibitionists, and were nearly impossible to find among the reeds. Easily, 5 out of 6 days there were no sightings. 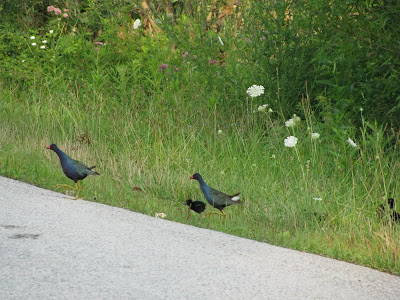 One evening several locals were hanging about hoping for a glimpse of the elusive birds. Much to their shock, the whole family marched boldly across the road. Joanne Wrasse documented the scene with a quick snap-shot of the little family: 2 adults, 6 chicks. 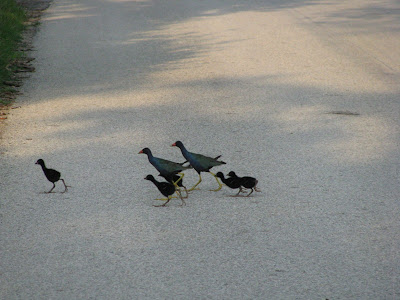 Purple Gallinule family Photo by Joanne Wrasse
I wished she had gotten a photo of the shocked birders as well as the birds! This was just too good to be true! And now we have the first confirmed breeding of Purple Galinules in Richland County. The last known breeding pair in Ohio occurred in 1962, and the linked article states... they were found in Yellow Pond-lily-"Spatterdock!"
...
So ends the story of Richland Couny's miracle in the marsh. There were some mighty happy birders around here, even on the many days we could not see the little black chicklets chasing after bugs. We knew they were there, deep in the Spatterdock, making our little wetland one species richer.
...
Isn't it amazing? Botany and birds... it all goes together.