It's an orchid alright, and a showy little flower it is. But they can be rarer than "hen's teeth," as the old saying goes. Botanists often ponder if they are really more out there than we know about, but their size and short bloom cycle make them extremely difficult to find.

This little population in Ashland county was originally found by Tom Arbour, a good friend and fellow botany lover. He knew beach maple forests can produce these beauties, and he must have had his eyes peeled to find them.
... 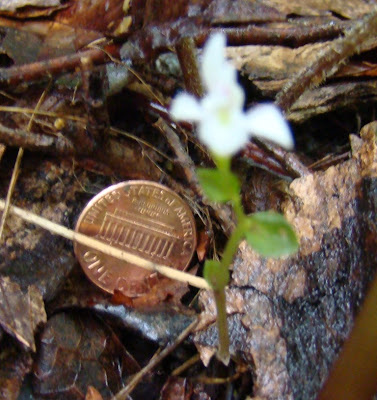 How small are they? Well, here's one beside a penny! Nevermind the rotten photo, it is all mine. Auto focus liked the penny better than the plant, but you get the idea. This is definitely a tiny orchid! 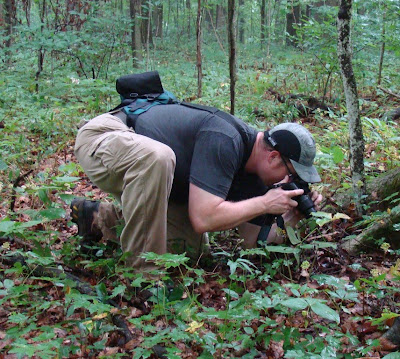 Dr. Erik Roth from OSU was along with our group. He studies Three-birds Orchids and their habitat and you have to get close to study this orchid! The largest population he has ever seen of the orchids was also in Ashland county. It had hundreds and hundreds of the mini-corsages, but no more. That location has become a sub-division; welcome urban sprawl. 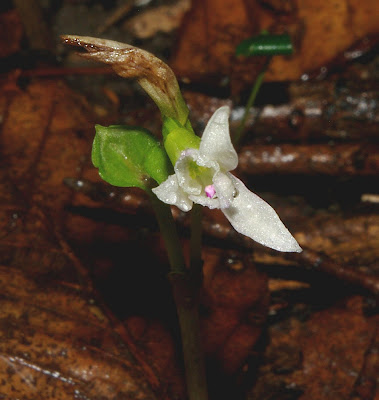 Three-birds Orchid photo by John Howard.
Normally Three-birds bloom the second week of August, but as I suspected, the timing was early this year. So get out there and start scouring around beneath the trees; they are often found in the same habitat as Indian pipe, Monotropha uniflora.
..
Good Luck!!! I am sure Erik would love to have a few more populations for his study.
Posted by Weedpicker Cheryl at Thursday, August 05, 2010