If you only look for butterflies on flowers, you could be missing some interesting species. One can find butterflies in more locations- and a few places you might never suspect. Most butterflies are known to puddle- or gather minerals from damp gravel or mud. 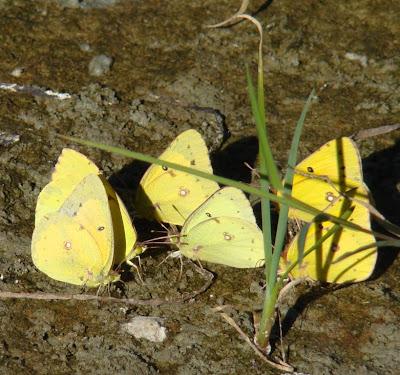 Mud flats are not just for shorebirds you know, here a bevy of beauties gathered at Ottawa NWR for minerals. All but one is the common species, Clouded Sulphur, but look closely at the squared-off wing of the mostly obscured upper left specimen. That, my friends, is a Dog-face. A rare member of the sulphur family who migrates from the south. They generally appear later in the season, if they appear in Ohio at all.

A Hackberry butterfly was found feasting on the body of a Lakeside mayfly. We may find some of their behaviors a bit horrifying, as we don't consider butterflies as possible carnivores.
Savoring a damp spot on a hot summer day, this Spicebush Swallowtail was fixated upon...

the fragrant juice from a dumpster. No flowers here. 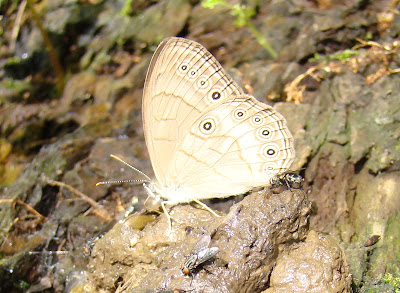 Scat, in particular, fox scat is very appealing to this Appalachian Brown and several other winged species. Appalachian Browns were once considered a single species with Eyed Browns. However, the Eyes are found in wet meadows where the much rarer Appalachian is found near damp woods and bogs. Robert M.Pyle says in Audubon's Field Guide to the Butterflies, "Both species are vulnerable to development of inland wetlands."
...
Looking closely at butterflies and discovering their secrets can be a repulsive, yet beautiful sight. I don't mind. I figure butterflies just keep secrets from the masses of people who chose to believe what they will, and do not bother to learn the truth about butterflies. Their lives are not all flowers.
Posted by Weedpicker Cheryl at Saturday, August 21, 2010