Nothing says "party" like boarding the Jet Express, the fastest means of transporting across the water to the Lake Erie Islands.  We boarded with 150  of our closest birding friends for our annual Biggest Week in American Birding extension trip to Point Pelee, Canada. 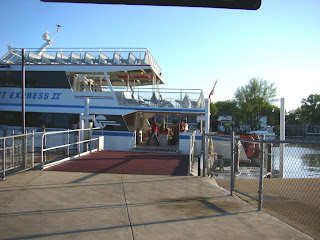 Don't forget your passport and don't be late.  They don't hold this boat for anyone. 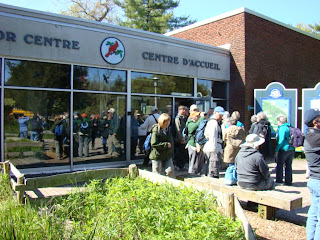 After an hour long trip by ferry and a short bus ride, we are cued up outside the visitor's center.

C'est  tres bon!  You know we have arrived in a foreign land, as signs are posted in both English and French. 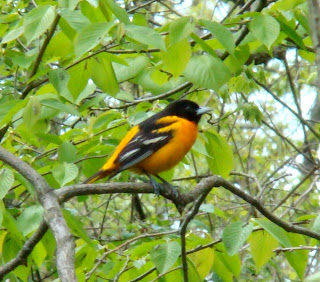 Birdsong filled the air.  Baltimore Orioles were both abundant and conspicuous.  Even if our list of warblers was heavy on Yellow Warblers, no one was complaining.

It was a beautiful day and there were numerous trails through the woods to be explored. 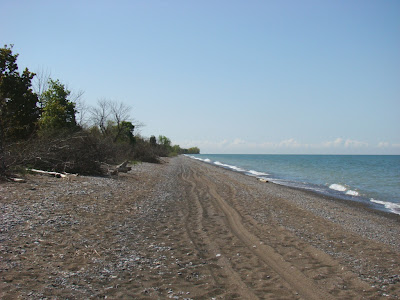 One led to West Beach, a reminder that we are on a point, with water on three sides.  The temperatures at Point Pelee are moderated by the lake. 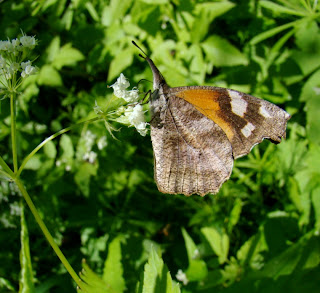 An American Snout butterfly was surprising find.  This adventurer has traveled even farther than us!  It is likely  to have arrived with the southern winds from Texas.  Usually we do not find Snouts until the hot days of mid-to-late summer.  One look at that proboscis and you'll know why it was named "Snout." 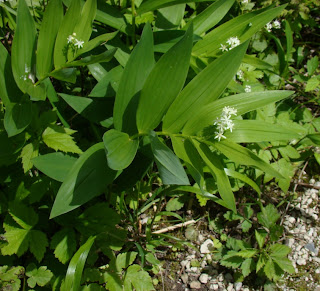 Star-flowered Solomon's Seal, Maianthemum stellatum is an indicator of a lime rich soil.  These calciphiles are found on the Lake Erie Islands as well as this Canadian point.  They are a reminder of the importance of the unique vegetation along the coast and islands of Lake Erie.

This quickly disappearing plant community is called the Carolinian Forest, as it replicates the plant communities along the coast of the Carolinas.  Unfortunately, it is also the most threatened by developement along the lake shore.  This habitat  is now receiving well deserved conservation attention, as it hosts the largest number of varieties of Canada's plant and animal species. 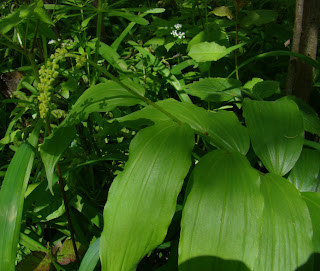 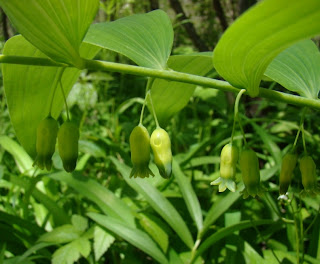 Both are easily confused with the more common Solomon's Seal, Polygonatum biflorum.  Note the flowers on this plant hang beneath in pairs- hence the specific epithet -bi (two) florum (flowered.) 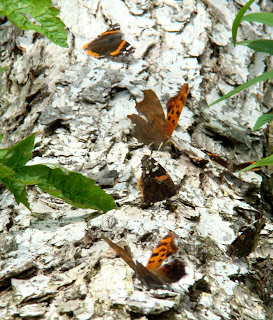 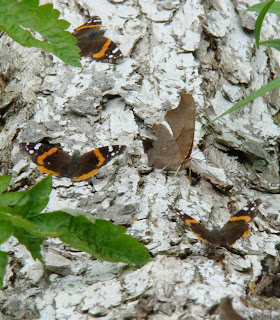 There has been evidence of the Emerald Ash Borer invasion in Canada as well. Many trees had been cut down,scattered throughout the forest.  One in particular caught our attention, as it was animated with the wings of butterflies.

Opening and closing.  The Red Admirals and anglewings (Commas) nearly disappear against the bark, only to flash beams of orange when re-opened towards the sun.  These butterflies were warming themselves in the golden rays that drifted down to the forest floor.

It was a most memorable day of sunshine, bird song, botany and butterfly wings.  I  hope you'll consider joining us next year.
Posted by Weedpicker Cheryl at Friday, May 11, 2012