Marblehead, Ohio is home to the rarest of all Ohio's native plant species- the Lakeside Daisy, Hymenoxys herbacea.  Other than here and a small population in Michigan, this plant only occurs in two areas of Ontario, Canada.  There is a special Ohio Division of Natural Areas Preserve set aside for this flower and a special day each May is held in its honor.


The Lakeside Daisy preserve is easily accessible off of Alexander Pike, but you'll want to wait until next May to visit- as the daisies have long pasted their peak bloom.   These plants are federally protected and you will NOT want to pick or molest any of these plants. 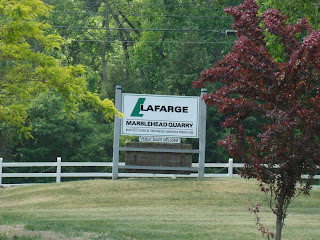 Our story begins at a Quarry Rd. location in Marblehead.   This is the home site of the LaFarge operation, a humongous limestone quarry that encompasses most of the center of the Marblehead peninsula.

Marblehead has a long history of quarrying, as many of the original settlers came to Ohio from Europe to work in the quarry.  Limestone has been shipped out of Marblehead by way of Lake Erie since the mid 1800's.  The end result is hundreds of acres of barren ground, unable to sustain most vegetation.  However, the Lakeside Daisy thrives in this moonscape-like habitat.

The call came out from the Federal Wildlife agents and along with several of Ohio's Department of Natural Resources employees, we were asked to help rescue daisy seed from areas about to be lost to future quarrying operations.
Many hours in the hot sun produces but a quarter- to-half a bag of seed.  With the heat index well into the 90's, we were cautious to keep hydrated while working in the blazing sun.

The extreme heat of spring 2012  brought the daisies to an early bloom. This should be peak time for seed collecting, however, many of the seeds are already past.  We spread out as we searched for collectible seed. 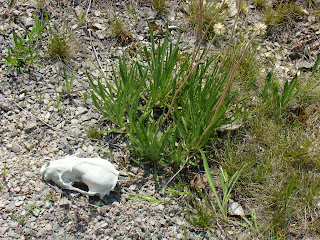 Often only empty seed heads  remained, and much of the seed had already dispersed before we were able to collect.   This raccoon skull was found bleaching out in the scorching sun next to a clump of spent daisies.

The daisy are so rare because they grow, in fact require, this barren and alkaline habitat. 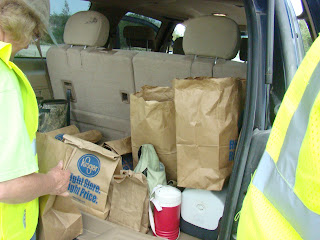 At the end of the day, Jennifer Windus from Ohio Division of Wildlife inventories our take.  We have gathered 6-8 partial bags of seed to be used in future restoration projects. It was a long hard day, but it gives one a sense of accomplishment to know we were a part of collecting and preserving the rarest of Ohio plants for the future.

Next year when you visit the North Coast of Ohio, schedule a time to visit this unusual preserve.  It is fascinating to see acres and acres of this this little plant blooming away on an otherwise inhospitable habitat.  You'll want to admire its moxie.