I recently visited daughter #2, the aquarist who lives and works in Cleveland.  Just in case you are confused, aquarist is not her horoscope, but rather her job title.  She works at the Greater Cleveland Aquarium and has been professionally working with fish (and often sharks) since college. 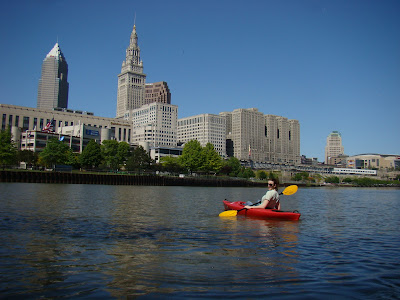 For most of her formative years, whenever I would ask her to go out in the field with me, she would ask, "Is there water involved?"

So it was no surprise when JJ asked me to bring the kayaks to Cleveland for a whirlwind tour of the city- by water.


We put in at Whiskey Island, entering the shipping channel and Cuyahoga River next to the old landmark U.S. Coast Guard Station. 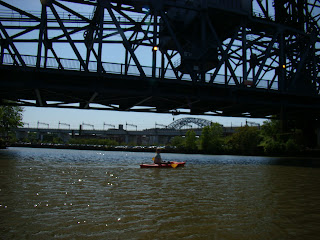 This might be called the "Tour de Bridges."  There are a lot of metal structures spanning the Cuyahoga and the railroad lift trestles are some of the most impressive feats of engineering to be seen.  It is hard to believe a span of metal this size is completely lifted skyward to accommodate the height of incoming freighters. 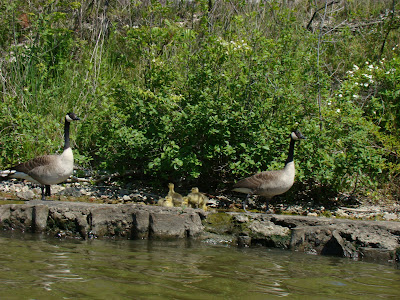 There is a little nature left to been seen along the river.  Good numbers of tree swallows and Canada geese call this place home.  There is often a large gathering of Black-crowned Night-herons which roost here in the winter, but they were not seen today. 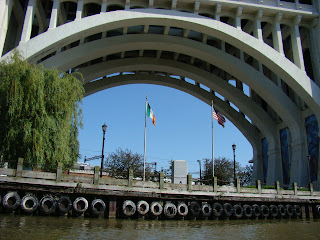 A monument to Cleveland's Irish population stands along side the  river at "The Flats."  Once a seedy part of town dedicated to shipping and longshoremen, it had a huge surge in popularity in the 90's and was a tourist spot.  Several businesses are still found here and the old power plant is the site of the aquarium.  Work is being done to infuse life into this section of town once again. 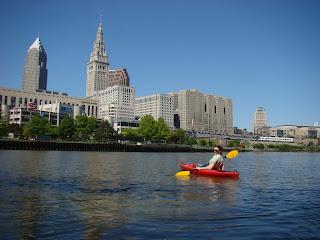 An hour of paddle time took us from Whiskey Island to the heart of the city.  We had excellent views of Terminal Tower and other Cleveland skyline landmarks.  All in all it was a most pleasurable trip and one I would do again.  Especially if I thought I would see those Night-herons!
Posted by Weedpicker Cheryl at Monday, May 21, 2012