Seeking out winter's green is a most enjoyable way to spend a chilly morning, and Hog Hollow Trail at Mohican State Park and Forest hosted several attractive offerings. 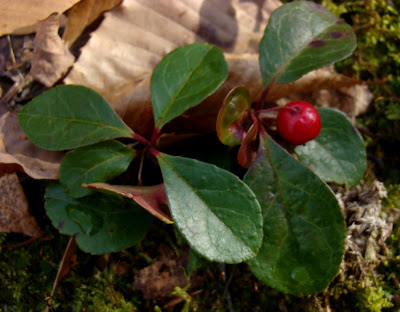 Winner of the "Oh man this smells heavenly" Award, Wintergreen smells just like: wintergreen!  Also known as Mountain-tea, because (yes, you guessed it)  they made tea with this plant.  Exceptionally lovely in snow, the apple red berries are a bit smaller than a concord grape. 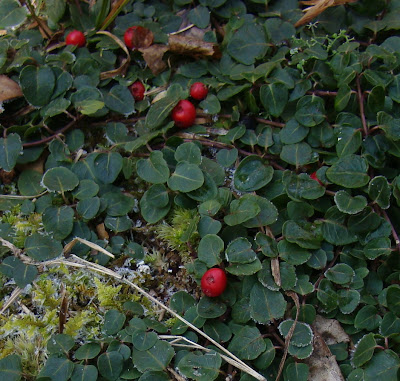 A similar-looking, but more diminutive plant is the Partridge Berry.  Large expanses were found along the trail, creeping along the higher, dry ground. The fruits are generally sparse, but this was a rather robust plant. The berries are smaller than wintergreen, closer in size to a pea. 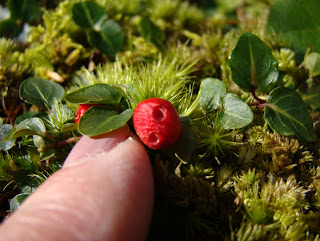 Two "belly-button" spots mark each of the fruits, making this a stand-out among the creeping berries.  They are the calyxes remaining from the two flowers which previously bloomed side-by-side with fused ovaries.  Think of those spots as the bottom side of a little apple, same basic idea. 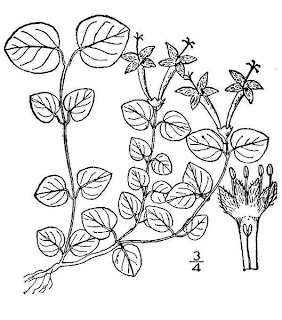 The drawing shows the delicate flowers blooming, two for each fruit.  This is a rather unusual arrangement amongst plants.

BONUS:  How many seeds does each fruit have?
They can contain up to eight seeds.  However, they are difficult to propagate by seed and most partridge berries are reproduced by runners and cuttings (in commerical cultivation).