Conneaut, Ohio.   The most north-east you can go in Ohio without leaving the state.  Sure, I could tell at least six different Conneaut jokes, as it has seen better days.  Those days were centered around rail transport and Conneaut was king.   Today, it remains a blue collar town with an active harbor. The only reason I could be persuaded to go to Conneaut (pronounced Konn-ee-ot' in Ohio) would be to see a good bird. 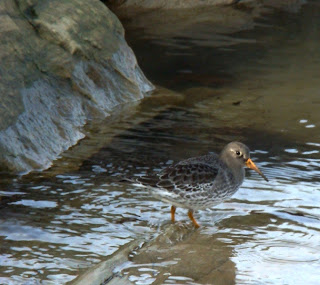 Purple Sandpiper.  A good bird, in fact, a darn good bird for Ohio.

Occasionally found along Ohio's Lake Erie break walls, Purple Sandpipers have a habit of showing up in the worst of winter's weather.  Usually snow is flying the break walls are sheeted with ice when these stout, short-legged birds come to call.  However, we were not disappointed to view this bird as the thermometer shot up to the 50's.  The hardy lakeshore-birding fanatics considered it light jacket weather! 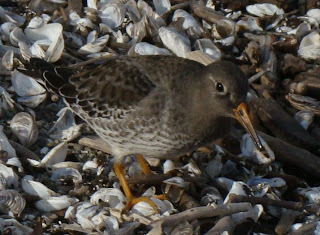 A group of us passed a pleasurable 15 minutes or so, while the bird sorted through the piles of lake mussels at our feet.  Several times the bird was so close were unable to photograph it.  Such a problem. 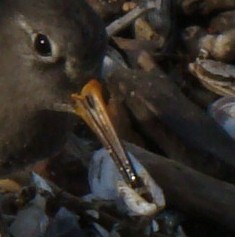 Its bill opens slightly at the end for pinching out the collop of meat from the shell.

After a bit of thought, I wondered it the historical highs of zebra mussels (a non-native introduced by ships ballast water in the early 1980's) was impacting the number of  Purple Sandpipers being seen along our lake?  A quick "google" showed photo after photo of birds feeding on "Zebra mussels" and records indicate Ohio has recent reports of  wintering birds.  Not at all like the historical- "just passing through" behaviors of PUSA.

So could these mussels- an opportunity for easy food- be attracting or prolonging Purple Sandpiper's visits on our lake shore?
The following link is a fact sheet on Quaggas, the big winner in the lake invasion market.  At least the 'Pipers find them tasty.    http://nas.er.usgs.gov/queries/factsheet.aspx?speciesid=95 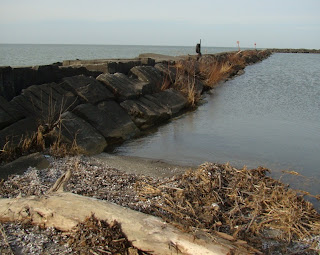 The break wall at Conneaut, the scene of the "crime" so to speak.  Piles and piles of mussels shells could look mighty attractive to a Purple Sandpiper. 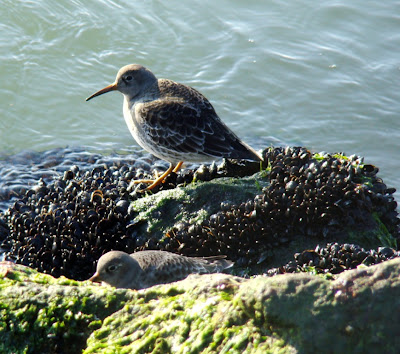 Purple Sandpipers are the hardiest of the shorebird types, wintering on rocky east coast shorelines and jetties.  I once witnessed a small wintering flock of 15 or so working the mossy rocks; they were giving no heed to humanoids nearby.  These 'pipers will wing off to the Canadian high Arctic to raise their young, and are not likely to encounter humans again until returning to their coastal wintering grounds.