The Last of Summer Whites

Summer heat has shifted to fall's cooling nights and Mother Nature now provides us with a palette of red and gold. But it would be a shame to bid goodbye to summer without a glance at two important plants in the same floristic family. Both wear white. 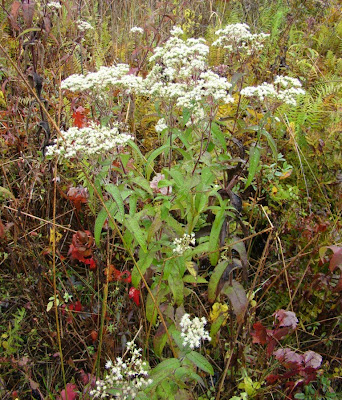 A wetland plant that is little noted and often confused with similar plants of the same genus, Boneset has a history and growth habit worth noting. It was historically believed to be a healing plant, one used to help mend broken bones. 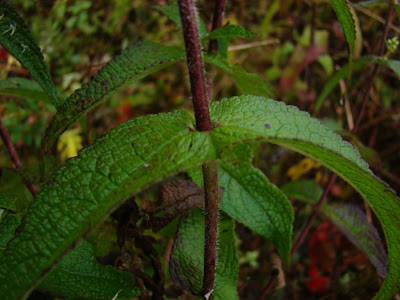 After all, look at the way the leaves have "healed" together to surround the stem! The leaf margins blend together giving the appearance of one leaf having been formed out of two. According to the Doctrine of Signatures, any well-rounded medieval doctor would know this plant must have curative powers. Today we know- this just isn't true. 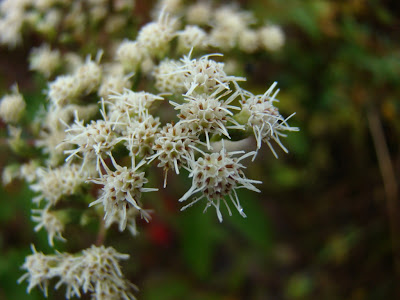 But those leaves are a much easier way to identify the plant than the inflorescence of the Boneset. Many of these late summer Eupatoriums look much the same, but for the comparison of their leaves. 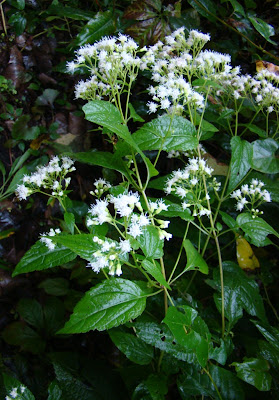 White Snake-root, Ageratina altissma (once know as Eupatorium rugosum, and long ago E. urticaefolium) also has pharmaceutical effects- of the deadly kind! This plant is known from rich soils, and damp meadows found along river bottoms. White settlers to the Ohio River Valley were plagued by a mysterious summer-time disease called "milk-sickness." It caused the trembles in free-range cattle and was usually fatal to the unsuspecting victim of tainted milk. The sickness killed scores of pioneers, like Nancy Hanks Lincoln, Abraham Lincoln's mother. Eventually Dr. Anna, a "medicine woman," took heed from a local Shawnee woman and the correlation between "milk-sickness" and White Snake-root became known. 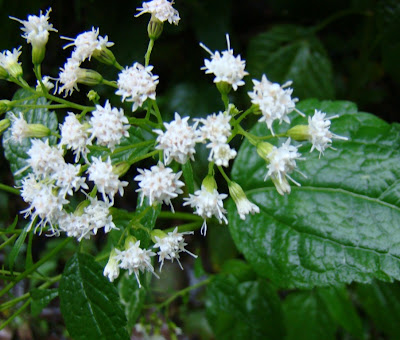 The florets of White Snake-root much resemble those of their cousin the Boneset, but the leaf is strikingly different.

Note the Latin name for Boneset- E. perfoliatum should remind us that the stem is completely encircled by the "healed-over" leaf. The White Snake-root has a much glossier leaf.

Both flowers have interesting cultural histories and the stories may well make up for the lack of showiness on their part. After all, these plants impacted the lives of many of our forefathers- including one of our greatest Presidents.