A Cawing of Crows

A cool autumn breeze has been teasing leaves off of our landscape, while I catch up on work in my office. Gradually I note, someone- or something- has turned up the outdoor soundtrack of cawing crows. The scene is pretty visible from my window... 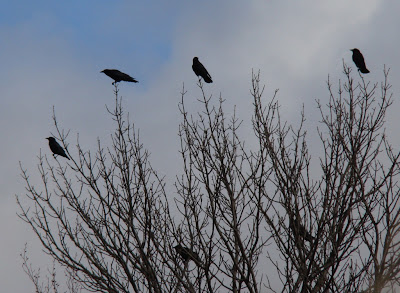 American crows are teeing up in the tree top, creating much more of a cacophony (ca-caw-phony?) than their normal feeding mode. This is serious business.

My curiosity gets the best of me, and I eagerly ditch the desk to go out to investigate. 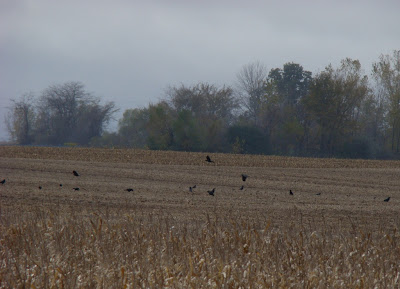 By now the alarm is such that fellow crows are being called in from the local fields. The farmers are having a dreadful time harvesting corn and beans with this year's rainy fall, but the crows consider it all good fortune. 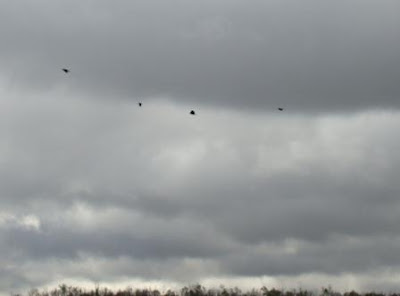 The tag-team is lining up. The large dark bodies peal out of the fields, winging their way to the sounds of their distressed comrades in my yard. 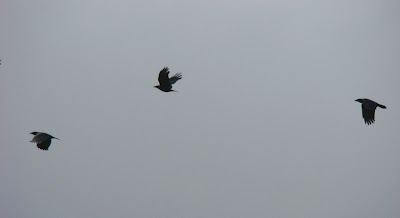 the Crips or Bloods have nothing on this gang. 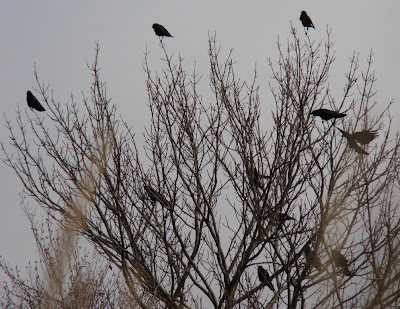 It is all for one and once the alarm is raised, the team assembles.

The crows go into a full defensive program. Cawing from perches and on the wing, they will wheel, fly circles and volley towards the tree where the offender roosts. 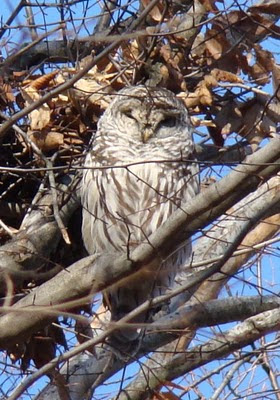 Looks like a heavy-eyed owl recently home from the night shift. This Barred Owl watches the mob assemble, knowing he will soon need to make a run for it. There will be no more peaceful daytime sleeping in this neighborhood. He has been put on notice. 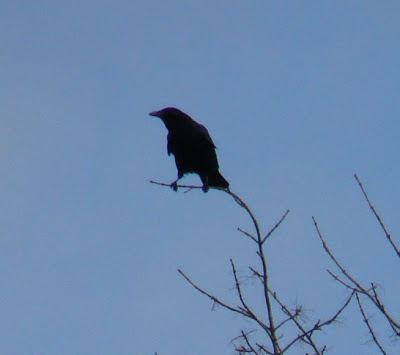 The crows reign victorious by day. Team work and persistence will drive the larger and heavy taloned predators from their midst. The stakes are high, as the owls would likely win if it were night.

Crows and Jays are members of the Corvidae family, the most intelligent of all birds. They are mortal enemies of the Great Horned Owl and will not take chances by allowing any known owls in their territory. Their gangland treatment of predator species is well documented, and a heck of a lot of fun to watch.

Next time you hear crows being "cawed" into a mob, be sure check it out!
Posted by Weedpicker Cheryl at Friday, October 21, 2011