One would think Sandhill Cranes, standing four feet tall, would be easy to spot in a field. But nesting sandhills can be surprisingly stealthy. And if you were looking for Ohio's isolated populations one would start in Wayne and Holmes Counties where the first of recent breeding populations (reported in 1987) were found. Considered endangered in Ohio, we birders in the Greater Mohican Audubon area hold them in highest regard. 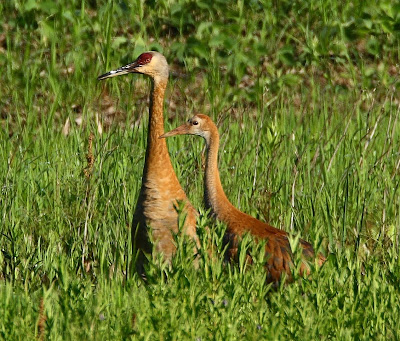 Last week the top was blown off the breeding bird news with Richland county's first family of Sandhill Cranes. Gary Cowell reported seeing two adults and two juveniles, called colts, in Richland County just off Bowen Rd. Sure enough, photographer Dane Adams, Jan Auburn and I were able to relocate the happy family hiding in the phragmites along Bowen Rd. 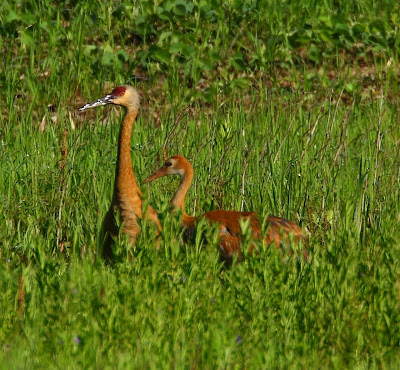 Adult Sandhill and Colt ........................Photo by Dane Adams
What a joyous occasion to see the product of what one suspects was the union of a pair of Sandhills who performed their spring courtship "dance" on this very field. This may be the first Sandhill Cranes born in Richland County in a century, or perhaps... ever. 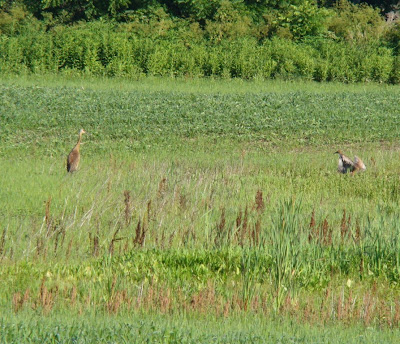 Historically, it is likely this was a wooded area at the turn of the century when these cranes were more commonly found in Ohio. Now the land has been opened up by agricultural activities, providing an area to forage near the Bowen Rd. wetland located in this field... and the nearby Ashland University Wetlands complex.
But the big surprise came when we went out to photo document these colts. We found a second pair of cranes across the street by the Ashland University wetlands! The red dots on the map mark the locations where the two families of Sandhill Cranes were foraging that morning. Who would have believed there were eight Sandhill Cranes making a living on this back road just off route 42?! 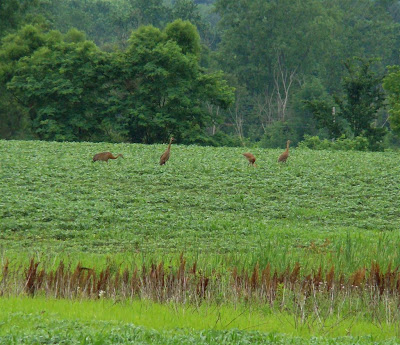 Scanning Ohio's farm fields turned up some surprising information for Ohio Breeding Bird Atlas.
...
You'll want to report any of your unusual findings to the fine folks trying to put Ohio's breeding birds on the map. And don't forget to report your normal, regular and routine findings too. It is all a part of the breeding bird history of Ohio needed to document the whole picture. And who knows? While you are out there you might find something spectacular too!