Columbus is the spot to find a horde of dragonfly watchers this weekend. The Great Lakes Odonata Meeting is being held at the Batelle Darby Metro Park with some field trips radiating throughout Ohio.

The Big Darby is a state and federally listed Scenic River, known for its clean waters and the rare mussels and fish within. Dragonflies are also a bioindicator of water quality, as some species rely on pristine waters for their larval or nymph phase. 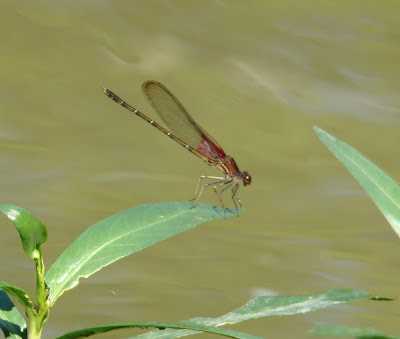 American Rubyspot is well known from the vegetated banks of the Darby. These damselflies are easily compared to the Ebony Jewelwing in size and shape, and both species' females show a white dot at the stigma. 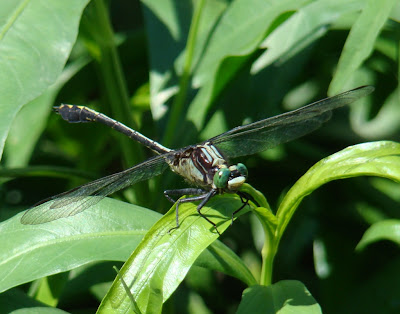 But this was the big thrill: Black-shouldered Spinylegs. One of those impressive clubtails, this fellow was the only B-S S willing to set a spell for photos. Most were off at top speeds, vigorously plying their trade of death to small insects.
We saw many more species than a poor photographer like me could dream of shooting, and we are about to head out for more wading along the Darby to look for the "cruisers". We've seen a variety of dragons- from Comet Darners to Dragonhunters and many, many Dancers and Bluets.
So, if you like dragons- you should be in store for more excitement in the coming posts.