﻿Spring is in full swing in Central Ohio and playing host to the full suite of spring ephemeral flowers.  Here today and gone tomorrow, the botanists are all trying to see as many species as we can manage.  Better yet, the rare or unusual species are what we dream about seeing.

A close relative of the commonly seen Cut-leaved Toothwort, the Narrow-leaved variety is an Ohio rarity.  It favors limestone and more southern climes.  We were able to see it on a recent trip to a preserve owned by Ohio Wesleyan University. 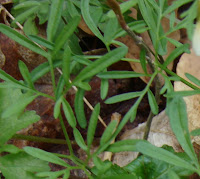 Take a close look at those leaves. They are not serrated on the edges like the common cut-leaf variety. The flowers look the same and one must wonder if it can play host to the West Virginia White butterfly. (You knew we would get back to butterflies, right?) 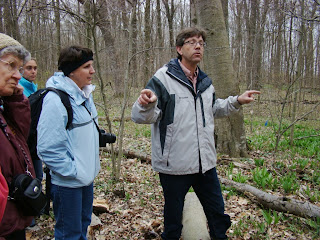 Our guide, David Johnson seems to be saying, "Look everywhere.  Rarities abound on both sides of this trail."  We were touring the Bohannan Nature Preserve, found just north of Delaware Ohio.  It is a property owned and protected by the Ohio Wesleyan University.  It is one of the very few places in Ohio that has the rare toothwort. 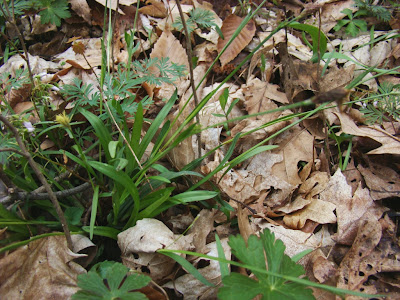 Carey's Sedge, Carex careyana    Sure... all sedges "look the same."  But this one was different.

It had long, stately culms.  A life-sedge for me!  One shudders to admit to a "life sedge list."  It is akin to the passport to total plant geek-dom. 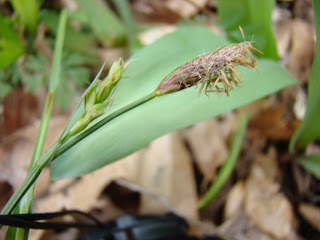 The reproductive bits all on one culm.  How handy!   The female parts are to the left and the male pollination parts are finishing up, on the right.  It must be bliss to be wind pollinated; certainly keeps things simple. 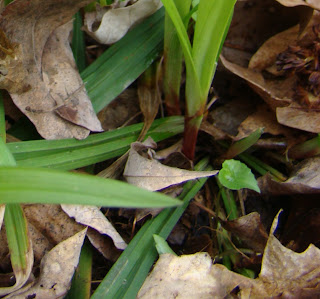 Look at the base of the sedge: red.  One of the keys to identifying Carey's sedge. That easy enough, right? 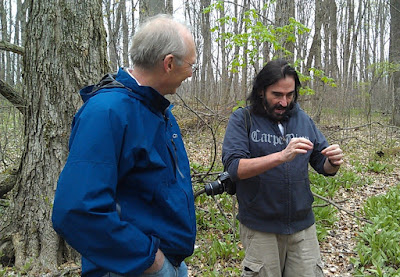 Special thanks to Steve McKee and especially to Ray Cranfill.  Ray openly admitted that Carey's Sedge was one of his favorites.  However,  I suspect he has many "favorites" among sedges (and ferns) as a widely acclaimed botanist who wrote the Ferns and fern allies of Kentucky.

It was a pleasure to tag along after these two knowledgeable guys.  And if you happen to be a fern fan, you'll want to get in Steve's group at Flora-Quest.  There are plenty of  varieties to see in Adams County.
Posted by Weedpicker Cheryl at Monday, April 02, 2012