One of the most fascinating plants on the Point Pelee trips was this Gooseberry. After spending hours in the books, I can officially say I know quite a bit more about the individual species enough to say one thing: YIPES Ribes! These species are maddeningly difficult to key out.

OK, maybe I know two things. Not only does it take a true botanist to sort these bad boys, there are many species around, some of them non-natives. Should we just totally avoid them? I don't think so, but maybe it is OK to just note they are one of the Ribes. They are quite interesting, and provided a great case study in the relationships of birds and flowering plants. 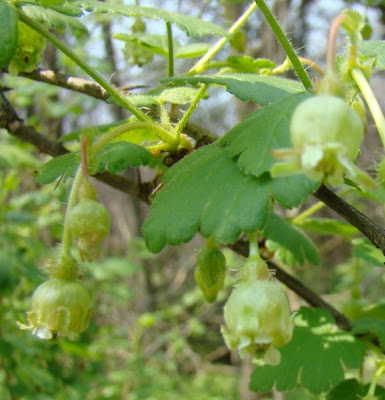 This is the Gooseberry in question from Point Pelee. I am fairly confident it is Bristley Gooseberry, Ribes cynosbati.

However, I am only confident because that is how it is listed on the FLORA of Point Pelee, a handy little list I will take on my next visit to Canada! Click on this and scroll to the bottom of the page for their complete listing.

Note: it may cause some confusion that the list is broken down into monocot and dicots, and Large-flower Bellwort is list as simply "Bellwort." 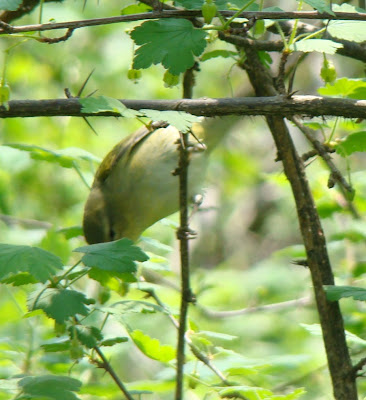 But why were we so interested in Bristley Gooseberry? Because it was a bird magnet.

This Tennessee Warbler was nectaring on the flowers, entertaining us for the longest time as it popped about acrobatically. A lucky moment finally revealed the tell-tale eye line. 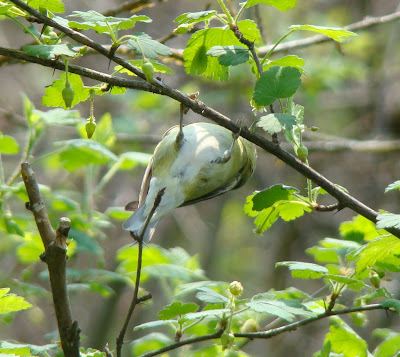 Most of the time, it would have done Dave Lewis proud- only giving us views of its underside.

This Tennessee was not the only bird in this bush, I first started watching this gooseberry when an Orchard Oriole had flown in to sip on the flowers. In the half-hour or so we watched it during lunch, several other species came by for their lunch- including a Ruby-throated Hummingbird. 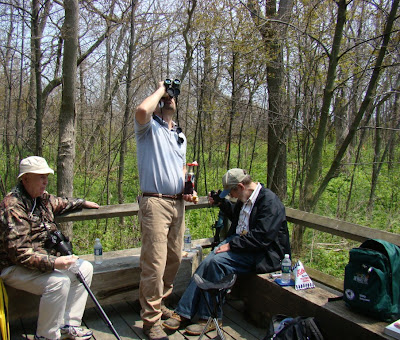 Trip leader Dan Donaldson (standing center) called out many species to an appreciative crowd. The gooseberry bush was just beyond this railing where we enjoyed our very birdy lunch.

Thanks to BSBO for scheduling this boat trip to a foreign land, filled with interesting birds and plants. The talented leaders on these trips make it fun to see and savor so many species in a short amount of time. And while the Magee Marsh boardwalk remains a great place to see warblers- and gooseberries- there are plenty of other interesting trips and locations offered at The Biggest Week. I hope you will try a few of them next year.

Thanks to Kim and Delores for allowing me to help BSBO in any little way I could, and a huge tip-of-the-hat to all the fabulous birders and leaders I enjoyed rubbing shoulders with through out the week, especially Greg Miller. And many thanks go to the Tropical Birding guides who helped at least a thousand people see their first Connecticut Warbler!

What an incredible 10 days it has been!
Posted by Weedpicker Cheryl at Monday, May 16, 2011