I hate to admit it, but I love a good bird chase. Nothing clears the head from winter cobwebs like standing above an impoundment of waterfowl. And something about the sound waves of whistles, quacks and honks drifting across the water are a tonic for my soul. One author compared it to the sounds of a "cocktail party." If so, pour me a big one, please. 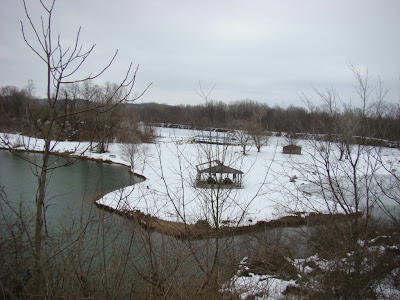 Recent reports to Ohio's List-serv are from the T J Evans Park just north of Newark, on the East side of Rt.13. It is a bear to find, but well worth the effort. This well-hidden park lies across and over a railroad track, but an obvious jewel, once you are there. 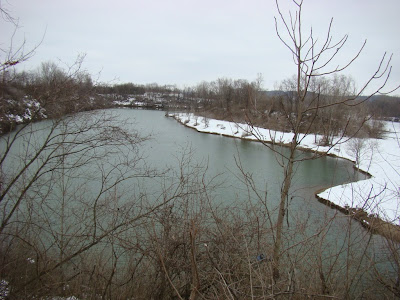 A viewing platform overlooks a water park, which appears to be the remains of a past quarry operation. With open winter water, my guess is the quarry shut down when they hit an artisan spring. The road to the lower level is closed, but no matter. When I was there the lighting and angles offered spectacular looks at the water fowl, creating one of the best set- ups for waterfowl photography that I have ever seen. Too bad I don't have the camera equipment to do it justice. 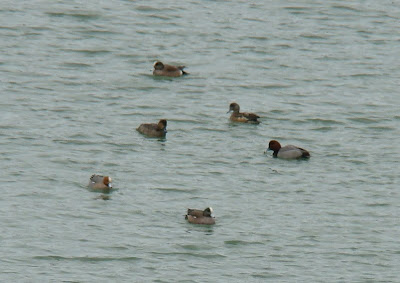 .......................--click photo to enlarge-
And sure enough, bobbing around like corks in a tub, our migrant duckies. Redheads and American Wigeons were the most common, with a beautiful Canvasback (not shown) and off to the left, the rich cinnamon colors of an Eurasian Wigeon. It is always a good find, as we rarely have more than a couple reported in Ohio each year. This is not the first Eurasian Wigeon I've seen, but it was certainly the best looks. Breathtaking! This "baldpate" was text book, in full living color. He followed the Redheads around, harassing them for their hard earned greens. These wigeon are a bit of a pick-pocket, and often liberate their meals from some hard-working diving duck. They call it kleptoparasitism... there is no cure. 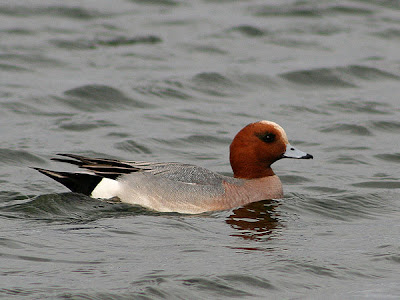 Close-up with an Eurasian Wigeon (this one from a
Cape Breton birds site- amazing photos there!)
If anyone gets some good shots of our Newark bird, don't hesitate to forward copies. This male was a spectacular bird.
Posted by Weedpicker Cheryl at Thursday, March 04, 2010