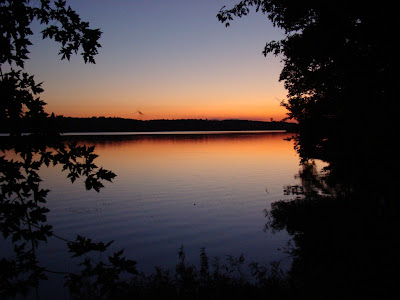 Spectacular sunset and a Little Brown Bat on the horizon.

Last evening I had the good fortune of a spectacular sunset on the Clearfork Reservoir, and was soon joined by friends who were also drinking in the cool night sky.
Actually, the Little Brown Bats were drinking in the Clearfork Reservoir... but they did so on the wing. Bats are devilishly hard to photograph, since they are creatures of the night, however Little Browns are the first to shake off the day's slumber and take to the sky. And the first order of the day, er... night, is to get a drink of water.
Just as the sun silently sinks into the water, 20 or more bats winged their way about the cove, wheeling and cutting with acrobatic prowess. Insects gathered above the day-warmed water were quickly dispatched, and brief fly-by visits to the water's surface provided the much needed drink to cut the "cotton mouth" of their day's sleep. Dipping and diving along the shoreline lasted but 20 minutes, then off they winged to feed at higher elevations above the tree canopy.
Word from the environmental community to our south, says the Darby's Indiana Bats have already started to migrate. It won't be long before these curious creatures take the cue from the cooling nights and head to more favorable winter conditions.
Bats have been a much studied subject of late, as fungal condition called White Nose Syndrome has been decimating whole communities. Add to this the impact of windfarms, and now what was the most plentiful family, constituting 25% of all the mammals, is under siege on several levels. A most fascinating species of warm-blooded furry fliers, you'll want to use these last few nights of summer to catch their show.
Posted by Weedpicker Cheryl at Tuesday, September 01, 2009