It is human nature to equate something rare with something desirable. Meet America's premier "wish-list warbler," the Kirtland's.  It also has an interesting connection to Ohio, as the first one described to science was found in Cleveland and named in honor of Dr. Jared Kirtland, a well known naturalist.

Kirtland's pass through Ohio twice a year, during spring and fall migration.  Their breeding grounds are the Jack pines forests of Michigan.  Jack pines need a fire ecology to complete their life cycle, as the pine cones require heat to release the seeds hidden within.

We don't know why Kirtland's use Jack pines, but it is their only nesting habitat. Before there was an understanding of this fire-dependent ecology,  the warblers' population had dipped down to less than 200 calling males (only calling males can be consistently counted.)

Michigan began managing pine forests to provide habitat for the Kirtland's Warblers.  Recent counts have the calling males now numbering close to 2,000.  Although it is a huge improvement from the 1970's, this work is not done.  Michigan state continues to open up more land and plant landscapes of evenly-aged Jack pines that Kirkland's need for nesting.  Their breeding territory is being enlarged in Michigan, and in recent years the warbler has also been found nesting in the state of Wisconsin and Ontario, Canada. 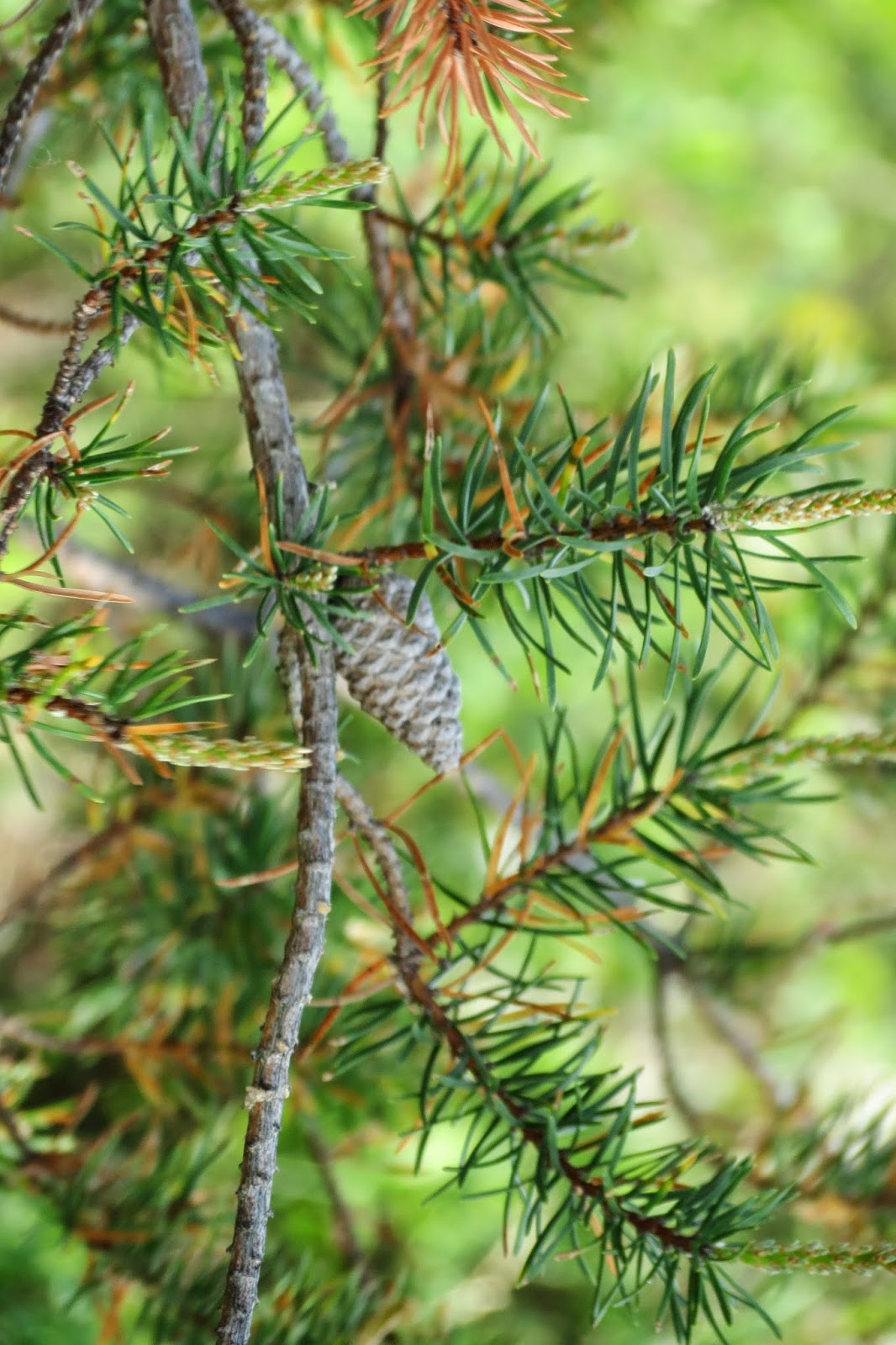 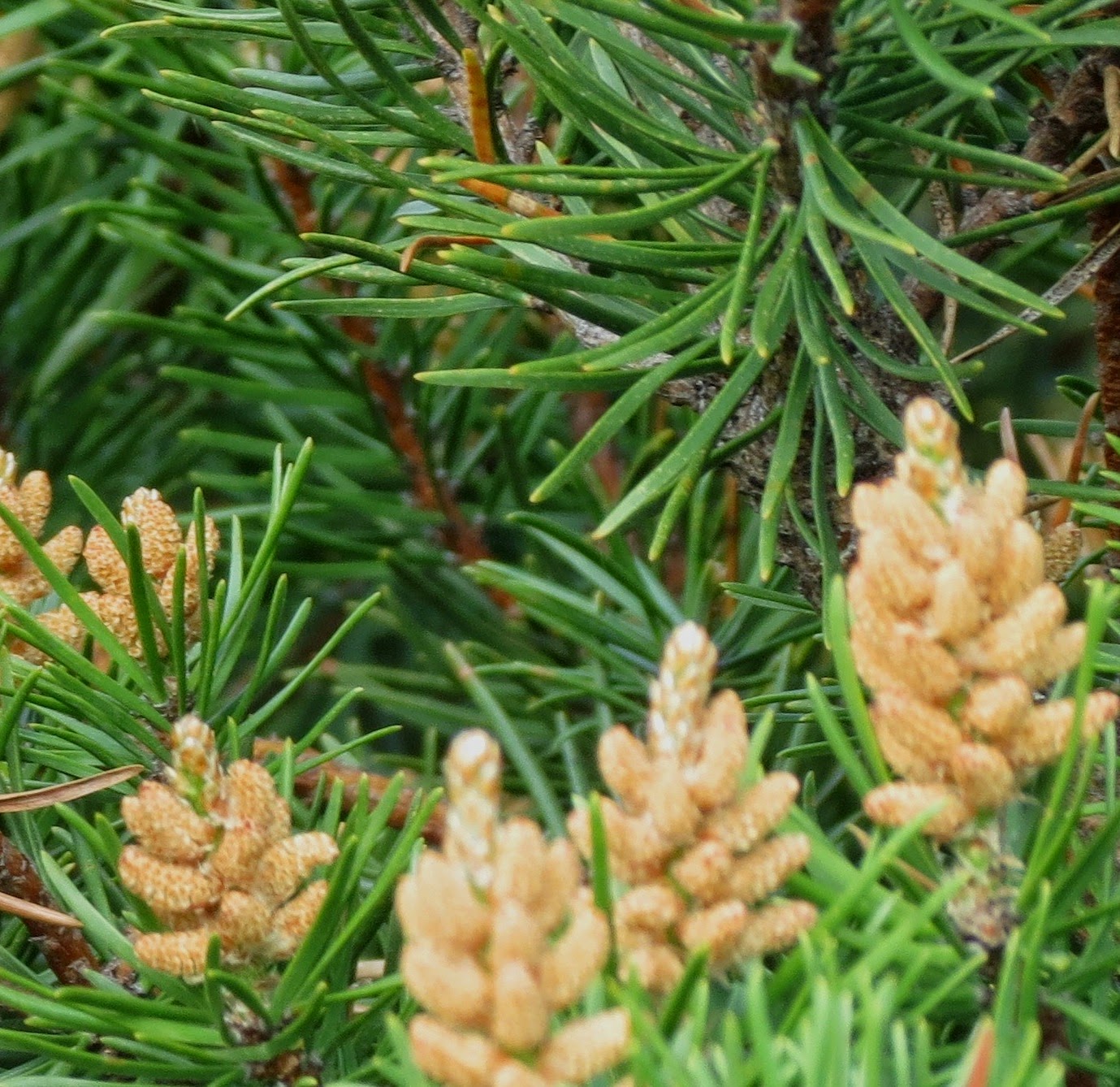 Jack pines, Pinus banksiana provide the perfect camouflage for Kirtland's Warblers.  The fresh growth, or candles, have a distinctive yellow color- very similar to the Kirtland's belly.  Conifers are wind pollinated and many of our trees were also loaded with pollen ready to start the new generations of cones. (photo left)

The cones (center of photo on right) are blueish-gray and I noted them to be an uncanny match for the textured blue-gray plumage on the Kirtland's back.  They were devilishly hard to spot with all these distractions built into the landscape. Imagine peering into this wall of green, while warblers pop about, often calling from mid-bush or from the ground.  We arrived when it was unseasonably hot and windy, and the birds were not making it easy to get satisfying looks.  Eventually we got our film and photos. 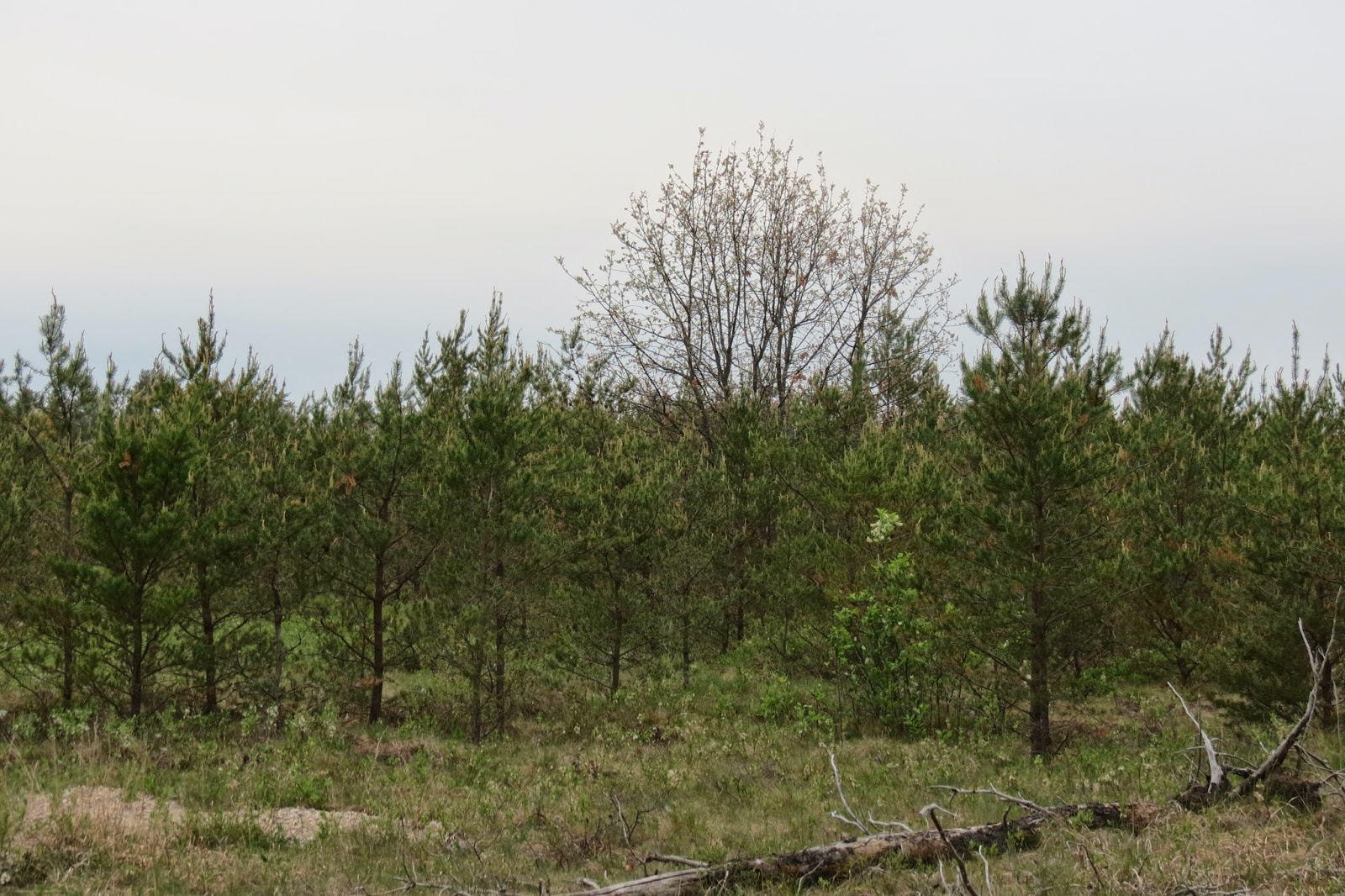 Occasionally a Kirtland's Warbler would land in the larger oak trees, to glean larvae and bugs from the unfurling leaves.  One of the park naturalists believed she saw the birds eating black-flies.  If that is the case, I can attest, they have tapped into a potentially endless supply of food!  Later in the summer, Kirtland's will also feed upon the blueberries which grow throughout these acidic pine forests.

Each of the pine forests seemed to have its own version of biodiversity. One had small, annoying insects that hummed and buzzed about our ears and eyes. Once I looked though my camera screen only to note a swarm of insects. They were annoying but bearable.

Hartwick Forest featured mosquitoes, while another had black-flies in blood sucking swarms.  It didn't take long for me to adapt a scarf into what I dubbed my birding burka.  Sure I looked crazy with my head all wrapped up, but it gave the back of my neck and face an amazing amount of protection from insects. At one point all that remained visible was my binoculars. That's when I realized... 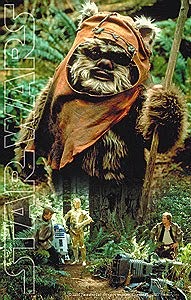 I probably looked like an Ewok. You know, the critters from Star Wars? These fellows would have been well-suited to life in the Jack Pine.  I bet they would like the blueberries!

Back to conservation:
Reducing the population of the parasitic Cowbirds is another step the Michigan Department of Natural Resources and the U.S. Fish and Wildlife has taken to conserve these warblers.  Unfortunately, since there are no more herds of bison to follow across the Great Plains, the Cowbirds have become a bit of a pest. When all of Michigan was deeply forested, with no fragmentation (caused by roads, farms, logging operations and urbanization), the warblers stood a chance.  In order maximize the warblers' recruitment,  now the Cowbirds must be managed.

Kirtland's Warblers are much more than another "pretty bird." Their life history and populations' struggle are intertwined with numerous species of plants, insects and other birds. To conserve a species we must first understand its total ecology before we can bring an order of balance back to nature.

Congratulations Michigan and thank you for the successful programs which conserve Kirtland's Warblers!
Posted by Weedpicker Cheryl at Monday, June 09, 2014