We ambled along, making no great pace nor needing speed to accomplish our goal: just taking it all in.

Jim Davidson, John Howard  and Bill Marsh helped me investigate the winter botany along the trail. It is a whole new level of "challenge botany" to identify plants by their winter remains.

But where in the "blue blazes" are we?  We found ourselves on a portion of the Buckeye Trail, winding through the Davis Memorial State Nature Preserve.

It has been a recent goal of mine to investigate some pieces of the Buckeye Trail.  What serendipity that we would chose a site that achieved my goal!

However, we are not the serious back-packing hikers who are attracted to significant trails.  We stumble, amble and creep along, occasionally commenting on our elderly knees. We take time to touch the bark of Blackgum, Nyssa sylvatica trees.  Big, chunky squares of bark are too tempting to pass by without tracing one's fingers along the lines.

We also bend the Leatherwood, Dirca palustris. This shrub is unknown to me from my region of the state. I was stunned to see USDA has records for Richland and Ashland Counties.  It is a natural wonderment, from the scooped-out bud scars to its bendable twigs.  Even in the winter it merits an extended look.

We stop to investigate the Shumard Oak, Quercus shumardii.  It's distinctive leaves have tuffs of "hair" on the veins of the back-side.  This is one of the many confusing oaks, previously unknown to me.

The moss and lichen play host to a myriad of life. We were entranced by a well-dress bug, adorned with lichens. John photographs a greenish-white dot on the moss, as it creeps along.

This is the larva form of the Green Lacewing, found in the fall on trees with lichen. These clever insects cover their backs with minute pieces of lichen, thereby becoming nearly invisible to predators and prey.  This could well be the ultimate in Halloween costumes!  We may have more on this topic in a future post. 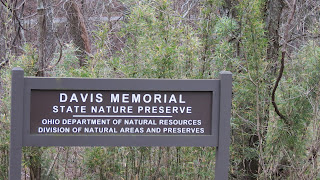 Meanwhile, get out and hike, or just amble and stroll.  Take your time to enjoy nature, before the winter snows cover much of the interesting botany and bugs now being found along the paths.

One might even consider following the blue blazes of the Buckeye Trail.
Posted by Weedpicker Cheryl at Saturday, November 23, 2013