Not a half day's travel from Ohio, but an ice age removed from the rest of West Virginia lies a botanical location that has fed my imagination for numerous years.  Being long overdue for some pleasure travel, this is the place I chose to spend some time. 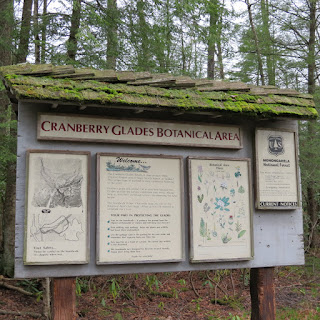 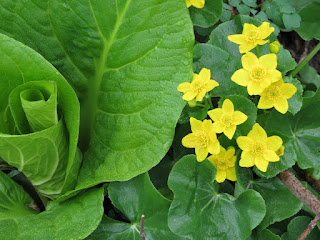 Sure it has all my wetland favorites, like Skunk Cabbage, Symplocarpus foetidus (as in fetid smelling) and the always lovely Marsh Marigolds, Caltha palustris.  Both are common enough in my favorite Ohio woodlots. 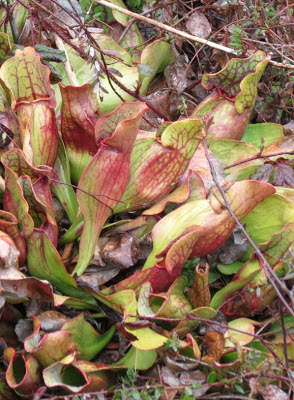 The Glade also offers up a carnivorous vegetable- the Pitcher Plant, Sarracenia purpurea. Woe to the insect who checks into this hotel.  But, this plant too can be found in Ohio, although not in my own county. 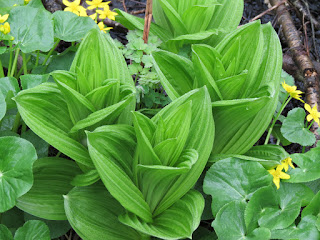 These unfurling leaves were something altogether new to me: False Hellebore, Veratrum virde.  It has several other common names (which is why we try to post the Latin bi-nomenclature as well)  like American White Hellebore, Bear-corn, or Duck-retten.  What the heck is a "Duck-retten"?  I know not, but I do know this plant is in the Lily family. Wouldn't it be grand to see it in bloom? 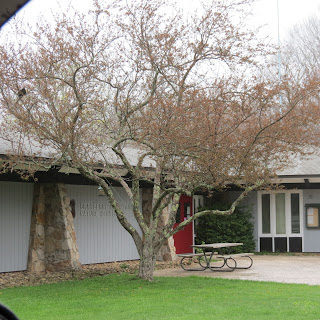 A bit up the road from the bog, or glade as it is called, there is the very attractive Cranberry Glade Nature Center.  It has many excellent displays inside and some very active bird feeders on the outside.  It is popular with all the visitors to the area, especially birders and reptile-ophiles. 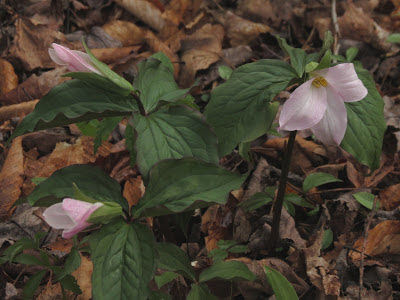 Around back of the building is a nature trail with an excellent display of native flowers.  This Large-flowered Trillium, Trillium grandiflorum in a shade of petal pink was a real show-stopper. 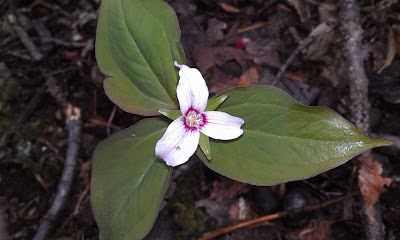 The Painted Trillium, Trillium undulatum blooms a bit later and is found predominately in the glade, but a few scattered samples grow along the nature trail as well. This stunner was an unexpected pleasure, which I have not seen since childhood.  Hello, old friend! 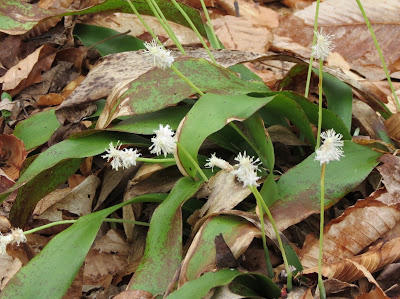 As luck would have it, I stumbled upon a life sedge!  This rarity, Frazier's Sedge (or Lily-leaf Sedge) is not even known from Ohio; it is strictly a southern and central  Appalachian endemic.  The Latin name has bounced around a bit, but an animated conversation on Facebook's Ohio Sedges group has it pegged as Carex fraseriana. Only a fellow Sedge-head might understand what it means to find this unusual plant, and to know intuitively that it was going to be something good.

This alone made the trip worth while, and we haven't even gotten to the birds!

Posted by Weedpicker Cheryl at Wednesday, May 22, 2013