Behold, nature enhances our lives in many ways. 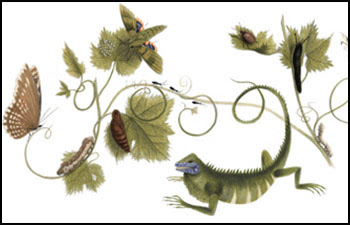 If you do not yet know the term "Google Doodle," I urge to to go forth and seek the Google page.  The art  or "Doodle" is frequently changed, and offers an interesting reflection of life, art and a potpourri of culture.

Today's Google Doodle caught me off guard.  It is a beautiful rendering by Maria Sibylla Merian.

Just as I seek nature in life, Google connected me with one who sought nature long ago.  Before "women" did that.  Shoot, almost before anyone else was interested in insects!

Thank you Google for enriching my life.  Click on the links for more on Google's latest doodle  and this significant influence in the development of entomology.


Read this article at:http://indiatoday.intoday.in/story/google-doodle-celebrates-maria-sibylla-merian-birthday/1/260285.html:
Google's latest doodlecelebrates the 366th birthday of naturalist and scientific illustrator Maria Sibylla Merian (1647-1717) on Tuesday. Maria Sibylla Merian is regarded to have a significant influence in the development of entomology.
Google, by posting a doodle on its homepage, has paid homage to the German naturalist, who was one of the greatest artist-naturalists of her time. The doodle features caterpillars, chrysalises, moths, butterflies and a green iguana in conjunction with the specific plants upon which they feed.
Born into a family of artists and scholarly printers on April 2, 1647 in Germany, Maria dedicated her life to the study and depiction of the metamorphosis of insects. She was exposed to natural history publications at a young age.
After her father's death, her mother married the still-life painter Jacob Marrel, who trained her as a flower painter. At the age of 13, Merian painted the transformation of silkworms into moths. Perhaps this was the beginning of her passion and her first hand observation of insect metamorphosis which later paved the way for her groundbreaking discoveries.
Maria's detailed observations and documentation of the metamorphosis of the butterfly laid the foundation for modern entomology. During her time in South America, Maria travelled around the Dutch colony, sketching local animals and plants.
Her lavishly illustrated book, the Metamorphosis Insectorum Surinamensium (The Metamorphoses of the Insects of Suriname) depicted the life cycles of insects she had studied.
The book was published in 1705, 10 years before she suffered a stroke and was partially paralysed. Maria died two years later. Her daughter published a collection of her work.