We had a grand time at Lowe-Volk Park on Friday night.

We saw several Saw-whet owls up-close and personal.  And they saw us... mostly making fools of ourselves.

Madison may have said it best.  When I noted every one had besmitten looks on their faces, she said she had been smiling so much that,"Owls make my face hurt!" 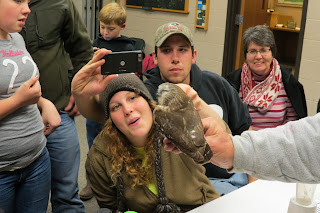 And it is not just Madison that loves these pint sized birds.  Look at Kaily.  "Ah..."  She has been struck daft. 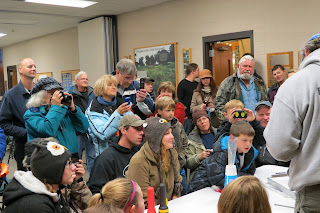 It is not just children either:  grown adults, men, women.  They are all mesmerized.  Every time I have been in a roomful of saw-whet watchers, the reaction is the same. 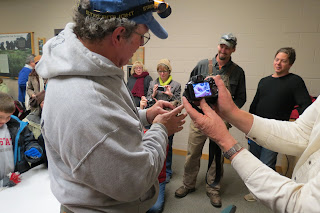 Thanks to Bob Scott Placier for traveling to Crawford County to make it all possible.  He has banded owls three years in a row and we have had success each time. Thanks to the park for offering this wonderful outreach program for birders and non-birders alike.

After all, NO ONE can resist the charms of these little owls.  One you've seen them up close, your face will hurt too!