A recent trip to Castalia Wildlife Area provided an opportunity for side-by-side comparison of our two most common Sumac species, the Smooth and Staghorn. 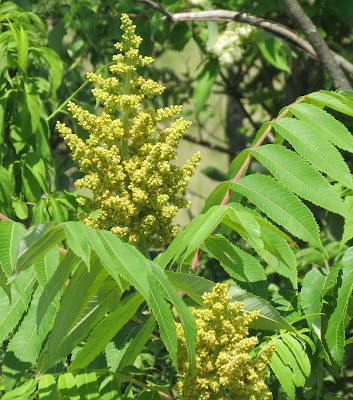 The Smooth Sumac, Sumac glabra was in full, golden flower.  A close look at the stems and leaves reveal the best reference for identification and the true nature of this plant: smooth. Its is as smooth as as a .. well, we won't go there.

It is also the only Sumac found in all 48 contiguous states.  It's complete ethno-botany would be interesting, I only know I have  ENJOYED both "lemonade"or rather "sumac-ade" and homemade jellies made with sumac.  Both were quite yummy.  Anyone have some recipes for this? 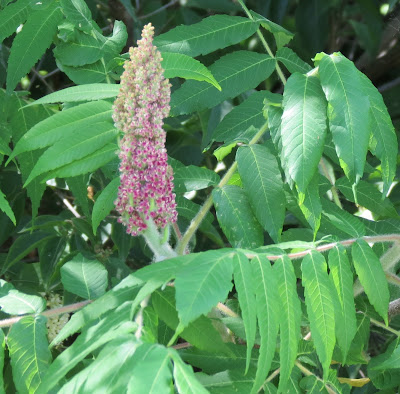 Ohio's most common Sumac has "hair".   Staghorn Sumac, Sumac typhina is easily recognizable even in its early flowering and fruiting, but the fuzziness on the stems and leaves.  Click on the photo and look closely- they are there. 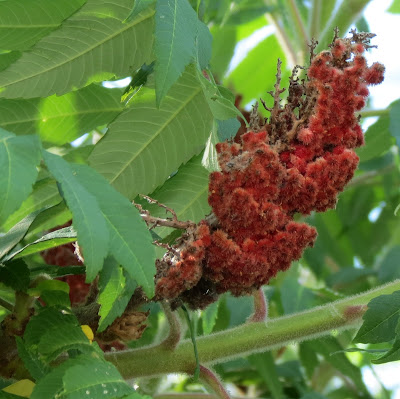 The  seed heads become a brilliant scarlet red, and are used as a seasoning for meat in some Middle Eastern countries.  Come fall, the leaves also turn to beautiful shades of red; it would be a lovely accent in one's landscape. 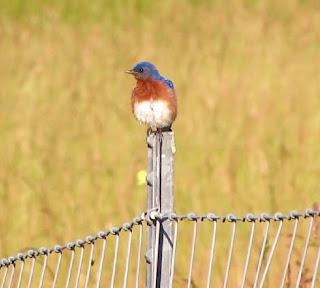 Eastern Bluebirds are often the local experts on Sumac.  It is a favored source of food for birds. Many members of the thrush family feed heavily on these berries during the winter months.   Remember that tip for you next Christmas Bird Count, and look for Hermit Thrushes in deep stands of Sumac.

This "weed" has many domestic uses, landscape appeal and wildlife benefits. It is time to take a second look at Sumacs!