My recent travels to the Adirondack Mountains of New York was much inspired by one little bird.  The Bicknell's Thrush is an endemic to the mountain tops above 3,000. feet, or "sky islands".  The land often tops out above the clouds and these high elevation mountains are much colder than the valleys below where Swainson's Thrush were historically found.

The effort to see this rare thrush encompassed a natural history lesson on the Adirondacks and climate change. Our trip, originally planned for Blue Mountain, was rerouted to the much higher elevations of Whiteface Mountain and a full hour to the north.

We were sorry to learn, the  Bicknell's Thrush population is rapidly dwindling from locations once known for them. Jan Auburn and I spent the day discussing the plight of the Bicknell's with the local expert and bird census pro, Joan Collins. Fortunately, Joan warned me that the Blue Mountain population was nearly non-existent- before we made a senseless pre-dawn trip to climb the mountain. 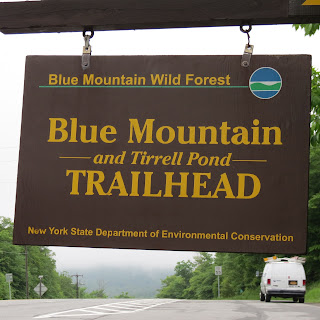 Bicknell's sing very early in the morning, so folks historically trudged up Blue Mountain at 3:30 or 4:00 AM to hear the elusive songsters.  This is a bird more frequently heard rather than seen.  However, in the last two years, due to overly warm spring temperatures, the Swainson's Thrushes are moving their territory up Blue Mountain.  Where once there were fifteen pairs of Bicknell's, now there were but a handful of calling birds during the survey.

It is important to hear this thrush call, as visually it is pretty much a dead-ringer for the gray Checked Thrush from whom it was "split out" in recent genetic studies.  Joan said, it is much more closely related to the Veery, which has similar voice qualities in their calls. 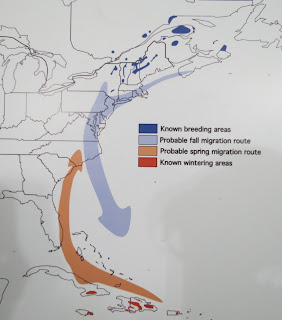 The warming  mountain tops are not the Bicknell's only problems.  As you can see from the map I photographed at the display at Whiteface mountain, their wintering range is mostly on Haiti and the Dominican Republic.  These are not eco- friendly places for bird populations.  We fear there are also tremendous pressures on the winter population as well as diminishing breeding grounds in New York.
You can read a complete history on Wikipedia or at U.S. Fish and Wildlife.

If you want to see this thrush, look to the higher mountains.  Embrace the opportunity for a mountain top experience, and I don't mean just the birding.  Experience it all. Whiteface Mountain offers some unique alpine habitat, with a host of plants adapted to the harsh life in bitter cold and winds. I am still sorting out all the fascinating botany I saw on this trip, and I hope to post that later.

Even more important, if you go to see (hear) the Bicknell's Thrush, don't miss the big picture.  In conservation, not unlike real estate, is it all about location, location location.  In other words: habitat, habitat habitat. As temperatures continue to rise, these birds have limited options for breeding success.  They must go higher, or farther north.  Eventually they will run out of both.


Too often we Ohioans are complacent about climate change, but the folks to our north have already seen the change at a much faster rate. You don't have to convince an native Inuit that change has occurred. With entire villages being relocated from melting perma-frost, they already have much in common with the disappearing thrush.