It is not everyday we get to rub shoulders with our heroes.  But today was just that opportunity for a group one might call the Fraternity for the Frogs.  It was  like Christmas morning for an enthusiastic crowd of  big kids who grew up playing in ditches and streams.  Over 200 people gathered in Columbus for the 2nd Ohio Amphibian Conference, an assemblage of  programs and scientific findings from the wild-about-wetlands crowd. 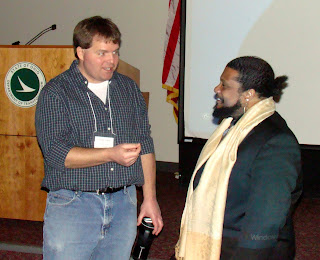 One of America's best known experts on frogs and the chemicals which disrupt their breeding, Tyrone Hayes presented The Cause of  Amphibian Declines.  He has studied the effects of  herbicides which mimic estrogen and  "chemically castrate" male frogs.  These chemicals do not kill frogs, but rather create mayhem in their reproductive cycle.  These same chemicals can cause estrogen-fed cancers in humans as well. 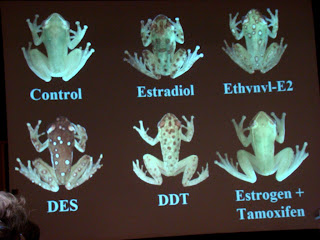 Dr. Hayes' research has become an environmental calling card, warning us about chemicals which are negatively impacting our lives in ways we have never dreamed.  Hayes has an amusing delivery of a less-than-funny story.  Think about those chemicals next time you buy herbicide saturated lettuce.  It won't take long to realize why there are no frogs calling in those chemically managed landscapes.

Greg Lipps spoke about Ohio's largest and most endangered salamander- the Hellbender.  Most of Ohio's populations have ceased to reproduce.  Young are rarely found.  Since these unusual creatures are only found in the Ohio River watershed, it is more important than ever to stabilize their populations before anymore potential harm comes to their streams and waterways.   Ohio will soon be in the business of selling water to industry throughout shale-gas regions. Let's not forget who resides in that water. 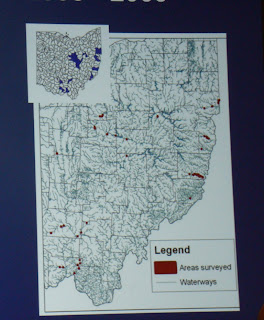 Clean water.
Amphibians are the canaries in the aquatic "coal-mines".  Their health should be important to us, as they are bio indicators for our future.  We should all be thinking about this a little more.

A special "thank you" to  Greg and all the people who made this incredible day possible, from all of us overgrown kids.

To read all of the speaker's abstracts go here.
Posted by Weedpicker Cheryl at Saturday, March 10, 2012