﻿Last week the weather was unnaturally warm for Ohio and I wondered why I had booked a flight to Florida. Although Ohio's weather nearly rivaled the balmy climes of the south, Florida has butterflies I will never see here. 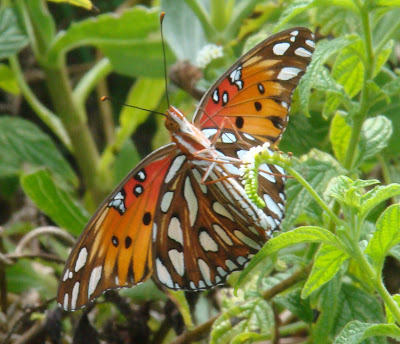 The long-winged member of the fritillary butterflies is quite common in the south; it is a very, very rare occurrence in Ohio.  It was one of  the most common butterflies seen during my visit to Florida. 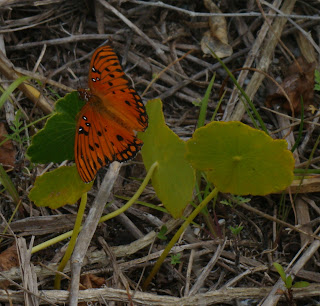 This "Gulf Frit" had landed on an invasive species of plant, the Water Pennywort, Hydrocotyle vulgaris.  The local tell me this non-native plant "appeared" everywhere after a hurricane and has been a nuisance in the landscape ever since. 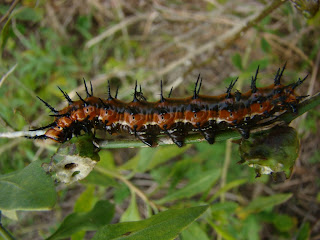 The Gulf Fritillaries use several members of the Passion-flower family as host plants.
The Gulf Fritillary caterpillars we found were feeding on (presumably) a passion vine.  There was not enough vegetation left intact to identify the plant species! 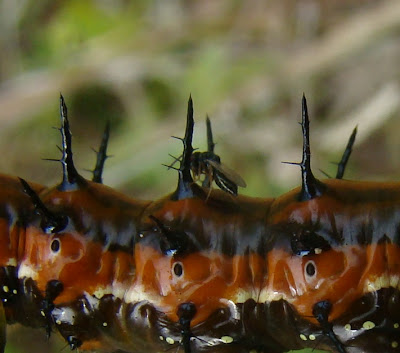 Unfortunately, it appears a Braconid wasp had, or was laying eggs on this poor caterpillar.  That spells "lights out" for this guy.  The eggs will hatch out and feed on the innards of the caterpillar, allowing it to live long enough until they reach maturity.  A good parasite doesn't kill its host, until it is no longer needed.

Nature is amazing, but at the same time, often horrific.