Mergansers- "Saw-bills" come in three flavors: Red-breasted, Common and Hooded.   All three are found in Ohio, but the Hooded Mergansers are a bird of "small" waters.  The Common Merg- which is  identified by by its expansive white breast-  and the more colorful Red-breasted Mergansers are generally found on Lake Erie. 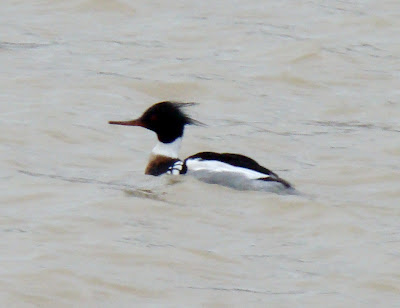 Many Red-breasted Mergs were gathered in the Lorain Harbor today.  The warm temperatures and spring-like drizzle must have put them in the mood for love.  The males, already dressed in their finest  breeding plumage, were actively competing for attention from the gals. 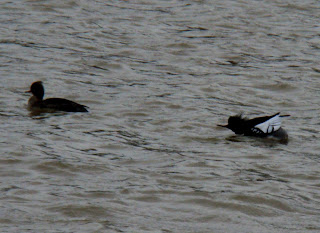 The female's plumage is a subdued brown- but he still thinks she is lovely.  He raises his bill and neck high in the air and then quickly bows forward.  "Hey girlie, over here..." 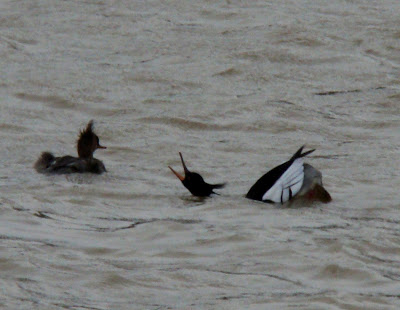 She must like what she sees, as she turns to watch the full maneuver.  Stretch and dip; its the male Merganser's tango.  He put on a stunning display by enlarging the surface area of the white stripe down the length of his body.  Apparently the ladies like that flash of white! 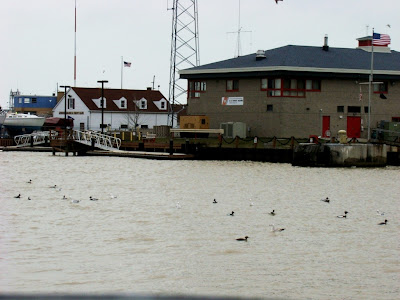 The channel in front of the Lorain Coast Guard Station provided ample opportunity to watch the courtship of these Red-breasted Mergansers.  It still must be early in the season, as they were not consummating the dance.  But spring is right around the corner and the mergansers already have the moves!