If ever there was a chance to overdose on "cute" it would be around Saw-whet Owls. The good folks at Lowe Volk Park in Crawford County invited my friend Bob Scott Placier up from Chillicothe to try his hand at banding the night fliers in our neighborhood. Good thing we were prepared for cute. 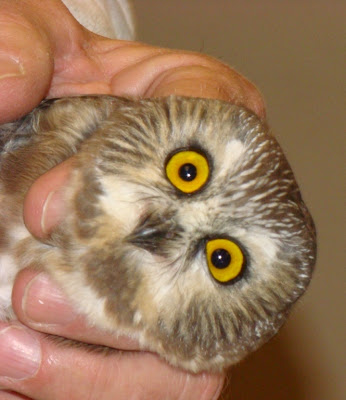 It was well after 10:00 PM when he netted a bird, unfortunately the little kids had long headed home on this school night. We lamented, "What a shame." Saw-whets are a huge hit with the youngsters and a prime opportunity for hands-on time with an amazing creature of the night. 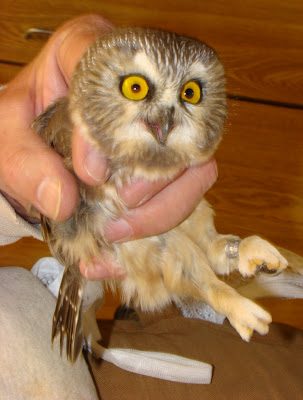 Even as this little gal was carried back to the banding station, she was clacking her bill in threats and curses. Not a happy camper, this one! These owls are generally noted for their easy-going attitudes, and often show little or no fear of humans. 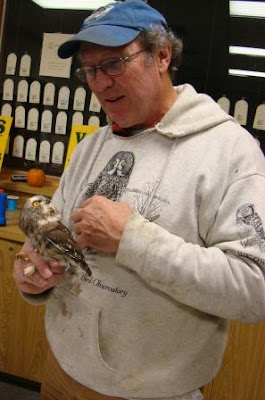 Bob has handled tons of these micro-owls, but this one was not impressed by his credentials. Here she is giving Bob the evil eye, as if to say, "Make my day..." This gal doesn't even care if he did give her a "ring."

It is a good thing the kids had gone home, or little Miss Feisty might have terrified them! 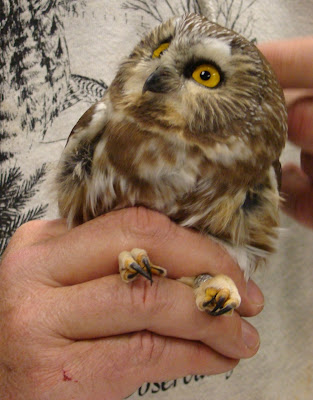 After the weigh in and general health and size data has been collected, Bob calmed this hatch year female down by stroking here head. Saw-whet really go for this and studies have shown it is similar to the motions a mother owl might use in grooming young.

Finally, she responds to his kindness a little late, she had already inflicted holes in Bob's hand with her sharp talons and bites. Note his bloody knuckles. 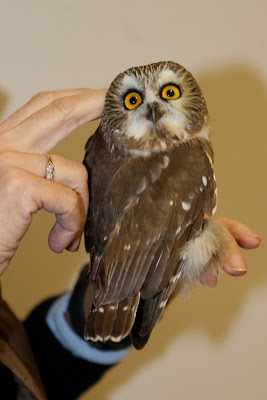 Holding a Saw-whet Owl is an amazing thrill. But these birds aren't banded just so we can get our jollies (although we certainly do!)

Banding birds allows these professionals to track and better understand the movements of birds, their ranges, habits and habitats. I have been to numerous banding stations and I've always been impressed with the ease and ability the pros exhibit while handling the birds, collecting data and returning the birds unharmed into the wild.

Saw-whet Owl banders are a highly knowledgeable group of birders, who care enough about monitoring species to endure the coldest, darkest nights of the years- to learn more about these enigmatic birds.

I was just lucky enough to tag along.
Posted by Weedpicker Cheryl at Wednesday, November 02, 2011