Adams County offers some of the best botany and geology in Ohio, and yesterday we made a botanical foray filled with learning experiences. Not only did we find the rarest of mustard (Draba) species in a cemetery, and the "mouse-tails" that inhabit mudflats, we admired some rocks and flora at the Whipple State Nature Preserve just outside of West Union, Ohio. 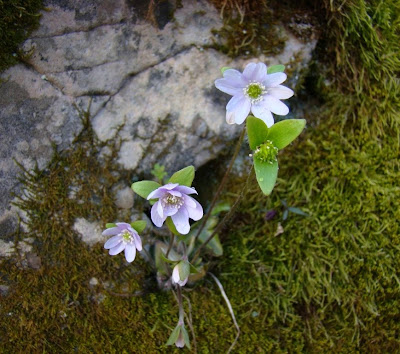 Much of Whipple Preserve is dolomite slump blocks, boulders and outcroppings. We admired many of the individual plants, beauties against the beast, eking out a living on the moss and moisture found in a harsh environment. 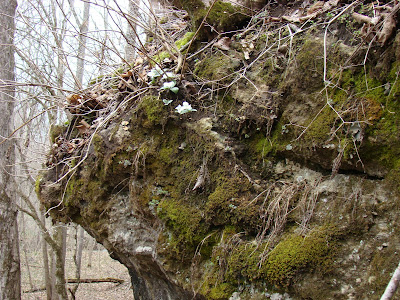 It is difficult to get a scope of the scale of some of these boulders, long parted from the native rock which spawned them. To move rock of this size would require the efforts of Sisyphus, the mythic Greek King. 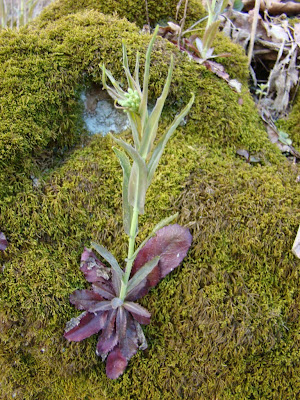 The plants who cling on for dear life, often delicately rooted in mosses, are saxicolous: rock loving plants. We also see some of these same plants in Mohican State Park, like this common rock cress. 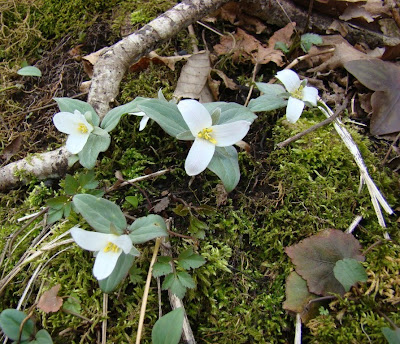 Much rarer is the Snow trillium, Trillium nivale, also found on rock formations. (Not in Whipple Preserve) 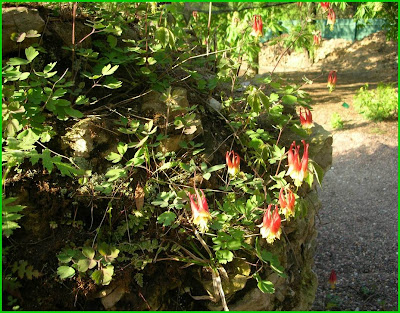 This chunk of Adams County dolomite is festooned with Wild Columbine, Aquilegia canadensis. A favorite plant of hummingbirds and sphinx moths, it should be in bloom during Flora-Quest.

Like to learn more about geology and botany? There is one spot left in Tim Snyder's and Guy Denny's trip for Flora-Quest. This is your chance to spend 2 days with the experts and an evening with friends. Check out the Flora-Quest website - and call the hot-line to reserve your place.
...
Thanks to my friends at Mid-West Native plant folks for making this trip possible! You can read more at Heather of the Hills', Jim McCormac's, or Mid-West Native Plants' blogs (all have quick-links on the sidebar of this blog.)
Posted by Weedpicker Cheryl at Sunday, April 03, 2011