The Dragons of Summer

Every once in a while, when we are out there botanizing, birdin' and butterflying... I get distracted. And it is usually one of those fast flying winged jewels in the family Odonata that catches my eye.
......
Oh, do nata 'nother insect I would rather watch as they eke out a living on a pond or stream edge. It is all sex and violence, with constant feeding in between. What an exciting life- more unbelievable than Las Vegas! 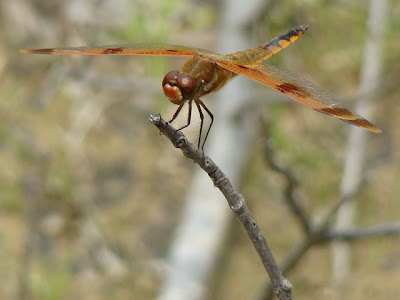 First one was seen on Kelley's Island in May, and in June we were fortunate to find another in Adams County. My first impression is always.. Hm, not quite right for a Halloween pennant... and it is not! But a golden body with tiger-striped wings is a perfect description for this 1.5" long uncommon dragonfly. 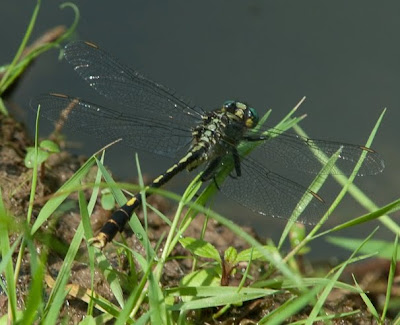 This one is not such a rarity, but the clubtails always get me excited! They look like the "Apache" attack-style fighters, small (2") and fast, compared to some of the bigger or slower dragons and damsels. Note the last couple segments of the tail are all black, with a serious-looking pincher (cercis). That's not for "pinching"-exactly. Cercis are used by the male to hold on to the female while mating. 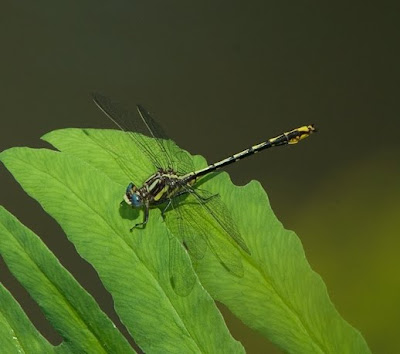 Lancet Clubtail- ...............photo by Greg Cornet
Just under 2" the Lancet Clubtail has more yellow on the final tail sections (what we call S-9 and S-10). This fellow has some handsome blue eyes, and is given to some fancy flying to impress the ladies. Oh, he is a "common" one, but you can see how easy it would be to fall for him. Note: he is at rest on the familiar frond of a Sensitive fern, Onoclea sensibilis . 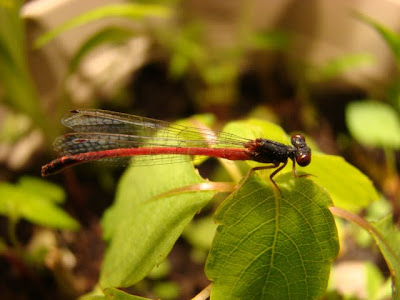 Eastern Red Damsel-
This crimson hued fellow is the rarest and one of the tiniest, under an inch long! Known from bogs and fens, it is difficult to find them as they rest on low vegetation and especially favor small spike rushes. It can be tough to photograph them so low to the ground. I have seen them at Cedar Bog, but this one was found in a ditch not far from my home. His blue-black thorax and tail markings make a distinctive impression as he rests on an emergent Touch-me-not or Jewelweed, Impatiens capensis. This little damselfly really stands out from the common "bluets".
...
Not just another "pretty" face, dragonflies are also bio-indicators, as some require pristine water quality. The more you learn about these fascinating creatures, the more addicted you'll become too!
Posted by Weedpicker Cheryl at Friday, June 11, 2010