Separated from Magee by miles of water, our BWIAB travels on Kelleys Island continued to the north east side of the island called "Long Point," where Camp Patmos and Jones Preserve are found. 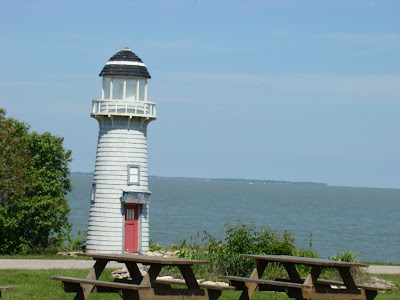 ...
A distant view of Put-in-Bay lies beyond the decorative lighthouse on Camp Patmos beach front. We were served a lovely lunch at this Christian Youth and Family Camp. But, I was a bit disappointed there was no traditional camp "bug juice" offered along with the iced tea and lemonade! 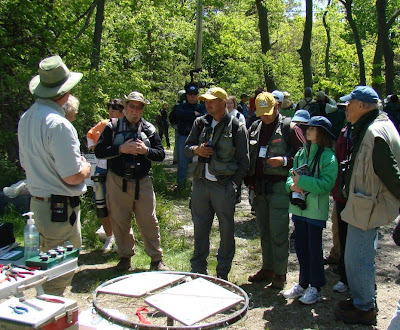 Tom Bartlett's people were doing a bird banding workshop during our visit. Bird banding is a way for people to learn more about subtle differences in birds, that might not be noticed without up-close inspection. Even guides Sam Woods and Christian Boix were interested in these proceedings.

And I was most interested in the fresh hatch of Swamp Darner dragonflies cruising for minuet insects along our pathway. This is a jumbo-sized early season dragonfly and our largest Darner species. They have impressive cerci (terminal appendages) used while mating. Dragonflies and Damselflies of Northeast Ohio is the best book around for learning more about Ohio Dragonflies. Much of the artwork found with it was drawn by Jen Brumfield- the talented artist and birder who also produced the BWIAB logo!
,,,

................... .... ... photo by Dave Lewis
We also found the even rarer Carolina Saddlebags- a migrant dragonfly species! These must have blown north to Kelleys Island on the winds and storms of the preceding days. Once in Ohio they can reproduce, but they are generally rare and localized.

And all the while, we guides were sweating the truth. On another not-so-distant shore, another rare migrant was being seen. Could we get the troops back in time?
To be continued...
Posted by Weedpicker Cheryl at Monday, May 17, 2010