International Migratory Bird Day at Magee attracted a much thinner crowd this year, something about rainstorms and tornado warnings scared off some of the casual birders. But we serious "warbler madness" types were still out in good number. 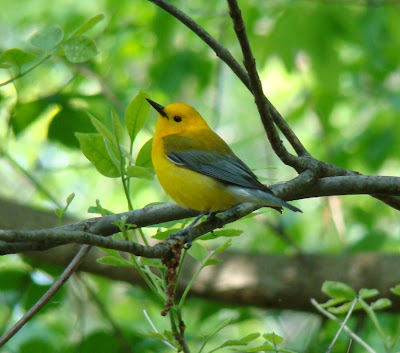 This magnificent Prothonotary warbler is just one of the 20 odd reasons we are willing to risk lightening and funnel clouds. With a window period of two weeks for these neo-tropical jewels to pass through Ohio on their way to the breeding grounds in Canada, we know if we miss it now, we will have to wait another full year until warblers in breeding plumage pass through again. So timing is everything. 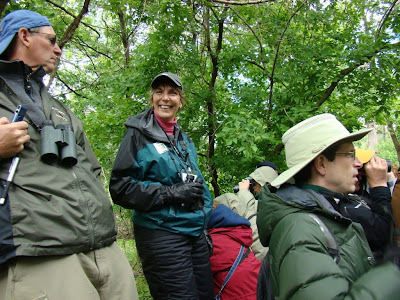 ....... .... Photo by Larry Richardson
Timing- and location. Here is your blogger, the Weedpicker, perched on a railing trying to claim a view from behind the front row birders. Some folks attend hockey or football games, we're just rallying for the Golden-wings, warblers that is! 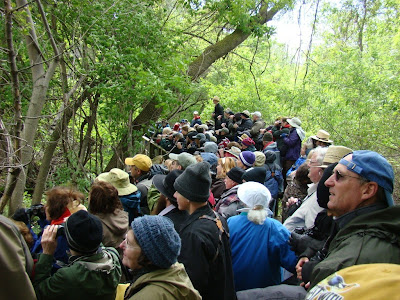 And by mid afternoon, the crowds were being thrilled with glimpses of Black-throated Greens, Bay-breasted Warblers, and the ever popular Golden-winged Warbler. 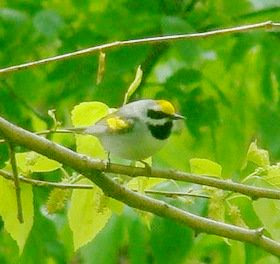 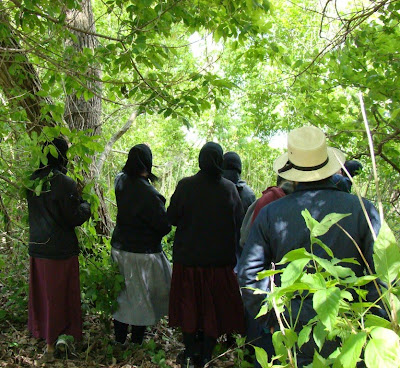 We found a second Golden-winged Warbler at Metzger Marsh, where we enjoyed birding with some of Holmes county's "plain" birders. Many of our area's Amish are excellent birders and whole families come out to see these colorful migrants. After one all-too-brief look, an elderly gentleman remarked, "Oh, it is pleasing to see, sure enough." And indeed, he is right.
...
If you are interested in our Holmes County Amish, and wonder about birding in their midst, you may want to listen to a recent interview on Amish Wisdom, a radio show hosted by Author Suzanne Wood Fisher.