Last year a select group of crazy people endured sleet, rain, and Cleveland Brown fans to go on a Lake Erie Pelagic. We were wet and cold but the up close looks at a lakefront Snowy Owl made us think it was all-in-all a good time. Fortunately, some of the folks at BSBO decided it would be fun to try again. So they booked the Holiday, a boat a bit smaller than the ship we passed in the channel.. 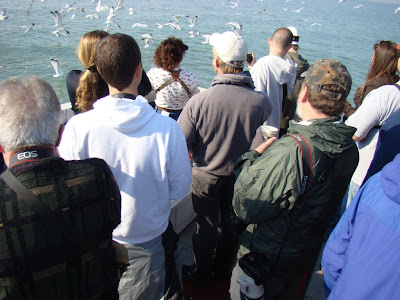 The up-shot? The record-setting beautiful weather made it a fun affair to share with friends. And the birds weren't bad either!
On the list serve John Pogascnik reported:
"There were a number of good sightings. We had an immature BLACK-LEGGED KITTIWAKE that gave a brief but nice view as it headed west. We had a very cooperative PARASITIC JAEGER. It chased around a few gulls and gave some nice views... Other noteworthy sightings was a very cooperative white-winged scoter, and great looks at a Peregrine falcon putting on a spectacular aerial display. All in all a very enjoyable day. Many thanks to Bob Faber, Kim and Kenn Kaufman, and everybody else that helped put this together. Also thanks to the ship's crew. Now if next week can go so well."
I believe next week's trip is already full, but let the good folks at BSBO know if you would be interested in a future cruise, and buy one of those awesome Winged Journey calenders to help support them!
If you would like to see all my photos from the day : Click Here
Posted by Weedpicker Cheryl at Sunday, November 08, 2009