Yesterday, while on a Sunday hike in Mohican State Forest, we stumbled upon a rather unusual discovery: a juvenile Turkey Vulture. We were surprised to find this "baby" bird so late into the year.

A quick text from my vulture-mentor, Scott Pendleton, suggested the adult vultures probably failed at their first nest, and this bird was likely the product of their second attempt for 2013.


The bird first made its presence known by its wild failing. It was his version of the Fosbury-flop.  Nothing pretty about it.

The youngster had launched from the ground and while unable to become airborne, it had gained enough altitude to grab onto a low hanging branch of a hemlock. From there it clawed its way -still wildly failing- to a resting spot about 15 feet off the ground.

I took a couple photos and moved back, to let the little guy regain his composure.
Thanks to the excellent program Scott Pendleton gave to the Greater Mohican Audubon Society last year, I was already on the alert when we arrived in this habitat that seemed “vulture-ish” to me.   We walked around investigating possible old nesting sites, in hollow logs and trees. 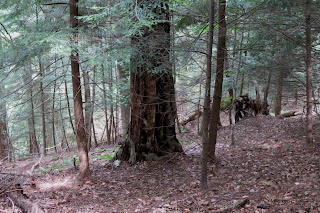 We suspected the bird had been raised in the hollowed out base of this tree.  Several white fuzzy-fluffs of feathers were lying in the ground in the general area.  It looked though the bird had been loitering about, possibly dreaming of his future career as a free-flying recycler.

Once spooked out of its daydreaming, it obviously wanted to fly but was not quite in control of its lifting abilities. 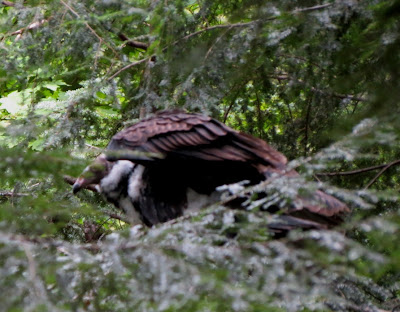 This side view of the youngster shows the white neck-ruff and under-shot of more white juvenile fluff.

Mom was probably out gathering some food for the youngster, and will be surprised to find him up here when she returns!  She shouldn't be too surprised. After all, he is getting to be a "big boy" now.  Most of his fluff has been replaced with flight feathers, and he will soon be joining the flock of his friends and family on a roadside near you.

It is a testament to Turkey Vultures that a bird species so common is rarely seen at this stage of growth.  The adults pick nesting sites in the most remote woods and rock crevices, far away from the public eye.

Those vulture parents just didn't count on cross-county hikers with an unusual interest in ugly babies.