Maumee Bay and the back roads near Ottawa National Wildlife Refuge offered up what might be considered the Littlest Week of Birding  (1 full day.)  The sky alternated spitting snow and pouring rain, but that only dissuades normal people.  We had a short period of time, and birds to see! 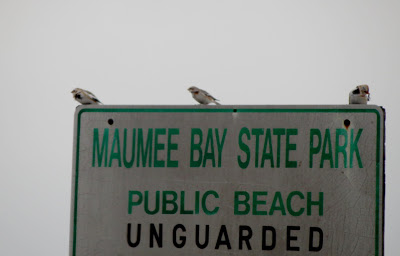 Several Snow Buntings flaunted the rules at Maumee Bay.   These winter charmers resembled giant snowflakes flying wildly across the frozen beach to suddenly land in the most unexpected places.


Snow Buntings and Lapland Longspurs will soon be packing their bags and headed back north.  The pack ice on Lake Erie is breaking up and the blustering winds, too, will give way to the sweet songs of spring.

This is quite possibly the saddest looking Bald Eagle I have ever seen, nearly worse off than our economy! It seems unpatriotic to post such a pathetic-looking example of our national symbol.

He couldn't get any wetter. Wading at the edge of an ice flow, water lapped about his feet as the rain pours down. I was as relieved as he, when the precipitation let up for a short while.

Clear song gave way, Konk-ka-ree...and the skies were filled with wave after wave of blackbirds.  Mostly Red-wings, with the occasional Grackle and Cowbird mixed in for good measure. 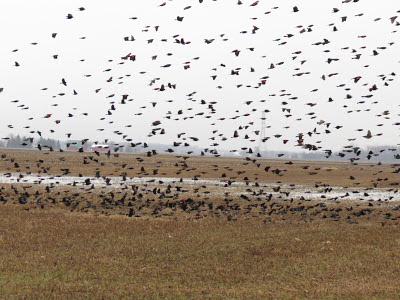 A rollicking ballet of spring, with red emblazoned on the wing.
Posted by Weedpicker Cheryl at Thursday, February 28, 2013