Since this is technically a botany blog, it might be time to get back to a little botany.

The Evening Grosbeaks in Mohican have had us all a-twitter, but I am always interested in what birds are eating. In the winter these 'beaks are granivores (No, I didn't make that word up, I heard  Jim McCormac use it. Maybe he made it up.)

The point is: they eat seeds. 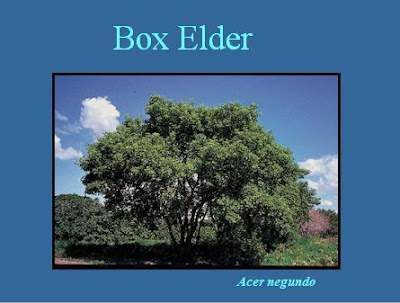 In many of my attracting wildlife programs I talk about the Box Elder seeds (little dangley things called samaras)  and their admirers, the Evening Grosbeaks.


Yum, that looks like Evening Grosbeak food to me, and it is. The 'beaks love these seeds from trees in the maple family and the seeds (or "fruits") of the ash trees as well.  It was once believed these seed were the attraction to the east for the huge influx of Evening Grosbeaks- developing in the 1900's.  Before that time they were virtually unknown in the eastern US.

Now the are totally attuned to bird feeding stations.  They come in great mobs, scarfing down the seed in huge quantities.  In the 1960-70's they were regulars; now their numbered have dropped drastically.  In fact, Audubon reports them in a 90% decline. 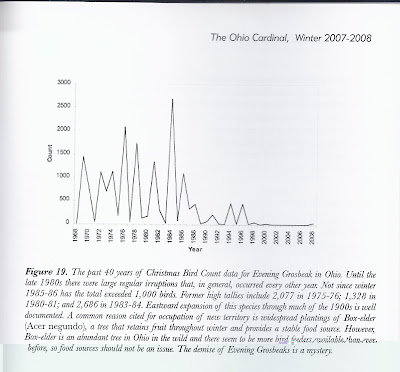 This excellent graph comes from Ohio Ornithological Society's  "The Ohio Cardinal" magazine.  Yes, it is brain food for bird geeks.  Jim McCormac put this graph together to illustrate the boom and bust cycle of the Evening Grosbeaks.  Even when the beaks were visiting Ohio with regularity- there were mini-cycles every two to three years.

Now we have a sudden drop off.  What is causing this? Some attributed the influx to the Box Elder seed, the botany types I know doubt that.  There was no great change in the B.E. population or its range.

There was, however, a huge out-break of Spruce Bud Worm in the boreal forest, so there were massive amounts of worms to feed to fledglings.  The 'beaks had very successful reproductive rates for several years running, which created a population "boom."  Now, something else must be going on.

Is this a naturally occurring "bust" after a boom cycle, or is some new "unknown" happening in the boreal forest?  That is the 6 million dollar question and when have that answer, we might better understand the cycles of the Evening Grosbeaks.

Until then, appreciate the birds while you can, as I predict they may be in short supply in the future.